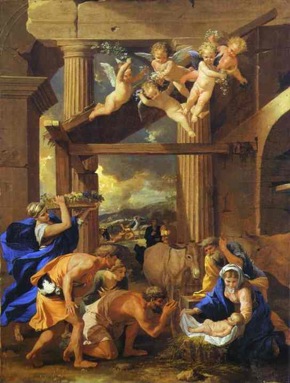 An entry on Magnificat’s blog explains more about the Charpentier’s music, excerpted here:

“The most distinctive feature of Charpentier’s Messe de Minuit is of course its use of the melodies of traditional French Christmas carols, or noëls. Since the fifteenth century, noëls have been sung by Frenchmen of all classes to celebrate the Christmas season. Most of the tunes that Charpentier employed in his setting of the mass ordinary were already centuries old and would have been as familiar to his listeners as Silent Night or O Come All Ye Faithful would be to audiences today. Indeed, many of the noëls used by Charpentier are still sung in Francophone countries around the world today.

“The use of the word noël in reference to the birth of Christ can be traced back even further to the 13th century. The word is related to newness, as in “good news” or “New Year,” and was used in non-Christmas contexts as well. By Charpentier’s time, noël could refer to Christmas Day itself, songs related to Christmas (like those upon which his mass is based), or simply an exuberant cry of rejoicing.”