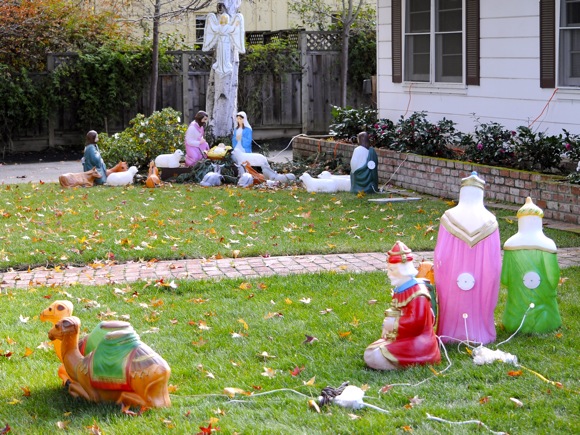 The Nativity scene at 455 Cotton St. in west Menlo Park is once again in place, with the three Wise Men making their way across the lawn slowly but surely, arriving at the manager on Christmas. As InMenlo reported last year, homeowner Bill Russ used to put the figures up on the roof, where they were stationary. They moved to the lawn about five years ago – and the tradition of the Wise Men moving ever closer began.

This year Bill inherited some new figures, adding two camels, another shepherd, sheep, and cattle. That’s more than double the previous number. We asked him for his thoughts this year, and he emailed some observations:

“A neighbor girl knows the figures are not living but was astounded that they were moving. She knew something was happening. At a fall neighborhood gathering, one fellow said, ‘I hope you are going to take them across the yard again, Bill.’ When I started the trek early this month, I spotted a workman looking at the three Wise Men and three camels for the longest time. He knew they were not where they’d been the day before.

“Right now two of the camels have gone their own way and will pause at the sidewalk for a couple of days. The sidewalk represents the River Jordan which is swollen – they must wait for the current to subside.

“You can tell what fun I have with this – nudging the knowledge and imagination of those who pass by. For me, it is all about our own coming to Jesus.”