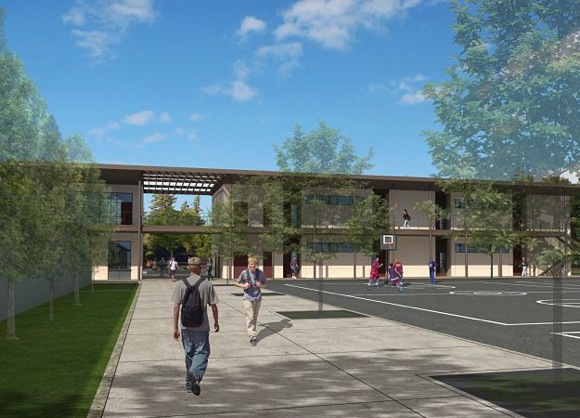 Brent McClure and architectural firm Cody Anderson Wosney (CAW), who recently finished renovations of Pride Hall, designed and laid out the plans for this building. The designs promise ways to conserve energy, including solar paneling and efficient air-conditioning.

McClure describes some of the challenges for designing this building. “One of the big issues we had to deal with at the beginning of the design[ing process] was where to put the building, because the campus as a whole is full, there is really no where to put a new classroom wing.” It was finally decided that the Media-Arts Building would be situated between the basketball courts and the football field.

When planning the building, many of the things that architects take into consideration include fire and light safety, access for the disabled or elderly, and structural systems. Zito says that the Division of the State Architect (DSA) “make[s] sure that the buildings are made to the highest possible standards. The last thing you would want is a school building to collapse on itself.”

The plans for this building are now completely finished, and both the school and the district are now waiting for the DSA to approve them. Once this happens the school can look for contractors to start building.

Building gets in line for funding

Before this building is erected, the school district needs to decide how to distribute their money. Because there are seven other construction projects planned in the Sequoia Union High School District, this M-A building is not an immediate priority.

The Media-Arts Building will have four additional classroom spaces designed specifically for classes involving computers and computer-related media. It will also serve as an entryway to M-A’s track and football field, as well as containing a snack shack and restrooms for athletes and fans.

Zito describes the building as “first and foremost a want. We could live without this building. But what it does do is that it consolidates programs that are spread all throughout the campus.” It aspires to promote a media-friendly atmosphere, where students who want to work in media fields can thrive.

The classes that will be housed in the Media-Arts building include Digital Photography, Journalism, Art & Animation, Video Production, Web Design, Computer Science, AP Computer Science, and the Computer Academy. It will also have gallery space for the display of some of the projects students work on and a video and a photography studio.

Zito says one of the main reasons he is so eager to build more buildings is that “you want to inspire people in their education, you don’t want to put people in surroundings that are depressing, outdated, and not maintained.”