Catching up with the Menlo Park Library Foundation 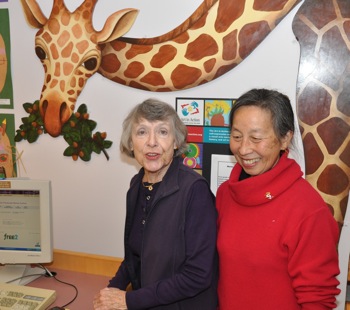 Despite a successful capital campaign that funded the renovation of the Children’s Library, many locals aren’t aware of the relatively new Menlo Park Library Foundation. Founded in 2005, its mission is to develop a private endowment to supplement the library’s resources for  the enhancement of facilities, services and programs.

“The Children’s Library was our first project,” said Board member Jane Wyman (left in photo). “It was a whopping success thanks to the great support we received from the community and library staff, especially Michele.” (Michele Burnham is Director of Youth Services.)

Betty Meissner (right in photo ) has long been involved with the Friends of the Library and just rotated off the Library Foundation board. “People do confuse the two,” she said. “The Friends have been in existence for over 50 years and answer more immediate needs as specified by the Director of the Library. Unlike the Foundation, the Friends don’t try to build an endowment.”

The new Children’s area opened last May and the Foundation Board is now in the process of deciding what the next project should be. As part of the process, they sent out fund raising solicitation in December and have begun to actively seek new donations.

“We know that eventually Menlo Park will need a new library,” said Jane, who’s lived in Menlo for 30 years, moving back to the community after a stint as an English professor a Colby College. “This building won’t be adequate for the future. In the meantime, we’re looking at more limited projects that have a significant impact on the community.”