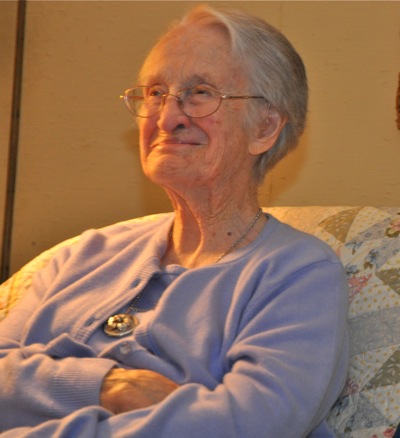 Elizabeth Goodrich Chamberlain has been writing poetry most of her life. “Well, not when I was two or three, but when I was in grade school,” she’s quick to clarify. Her poems made their way into The Katharine Branson School’s literary magazine, but by the time she was at Vassar, her focus was more on her major in Italian than poetry.

“I wasn’t encouraged to write poetry,” she said. “Plus, I wanted to go Italy and stay for a time. But the war [WW II] interfered with those plans.

While raising a family, the native Californian who was born in 1916, would pen a couple of poems a year. “It was hard to write with four children. I had two sets, 10 years apart.”

Later when she settled on the mid-Peninsula, she met other people who were writing. They started meeting in each others’ homes to share their work, and Elizabeth’s volume of poetry grew, filling desk drawers.

With the prompting of family and a fellow parishioner at St. Bede’s Church in Menlo Park, the idea of publishing her poems took form. “We had long sessions with Mother,” said her son Gordon. “She would read a poem, then set it aside, and then sort into piles of yes, no and maybe.”

The result is The Woman at the Ford, a volume of her poetry that’s just been published. According to Elizabeth, the book’s title is also the title of a series of poems in which she imagines herself in various way. “It’s a symbol to me – where you are in life.”

The public will get to hear 12 of Elizabeth’s poems at a poetry reading scheduled for Sunday, Jan. 16, at 4:00 pm at St. Bede’s located on Sand Hill Rd., which will also feature occasional musical interludes. (One selection is at the end of this post.)

“I used my maiden name on the book,” she said. “I realized that I’d been living here a long time and maybe someone I went to high school with would see the name and remember me.”

About having her poems published in a book, she said, “It’s a very different experience than just having them in a drawer some place. I’m pleased with the nice reception it’s getting.”

THE TRUEST CHRISTMAS OF ALL

The truest, most wonderful Christmas of all
was not when the cousins came
and we all sat down to hawthorn on the table,
red candles in silver shafts, white napery and turkey,
but the year of the big storm
when we nailed down the doors
and the gale burst through,
sweeping to the floor the spangled tree,
filling the captive house from rug to roof
with the clean fragrance of the ocean wind.