by Meredith Geaghan-Breiner on February 5, 2011 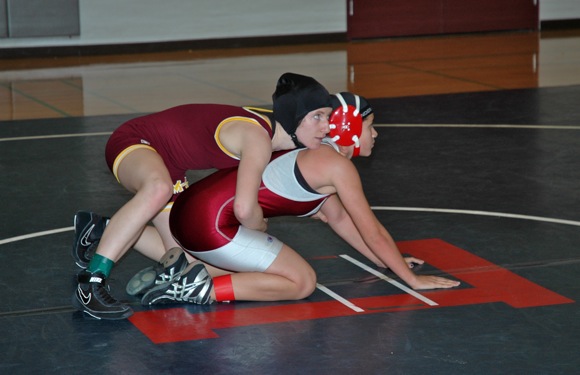 Editor’s note: This article was written by Allison Silverman as well as Meredith Geaghan-Breiner, both of whom are on the staff of M-A Bear News.

Being the only girl on a testosterone-dominated wrestling squad may seem like a daunting prospect to some. But for Kendra Wiley, the first-ever female competitor on the M-A wrestling team, it’s no big deal.

“I just consider myself one of the guys,” she says. Although she often does have to wrestle opponents of both sexes, “[she doesn’t] think it’s awkward.”

In fact, she considers the opportunity to practice with guys invaluable, helping her increase her strength and aggression. Wrestling is “physically straining,” she says, and she needs the most challenging practice she can get. Wiley’s hard work pays off on the mat; in her second season, she is undefeated this year and working on competing at State in a few weeks.

Wiley began wrestling sophomore year, joining the team with a group of friends and no prior experience in the sport. Though the other girls soon dropped the sport, Wiley discovered her passion.

“It’s a really good workout [and] definitely is a stress reliever; if you’re having a bad day, you can just take it out on somebody in the room,” she says. And although she finds the extensive time commitment draining, she says “that’s just the way it goes. If you’re not dedicated, it’s not worth it.”

However, next year may be her last season. Wrestling in college is not a priority for Wiley, though she would consider continuing the sport if a school she had interest in happened to have a girls’ team.

Though the sport is rough and physical by definition, Wiley has been relatively “lucky with injuries.” She did break her nose a couple weeks ago and has sustained other smaller strains. And, of course, she is “bruised almost all the time.”

The intensity of the sport is a given, but it doesn’t hold Wiley back. Her dedication and tireless practice have allowed her to, as she puts it, “fight [her] way to the top.”