Flock of flamingos with a fundraising purpose 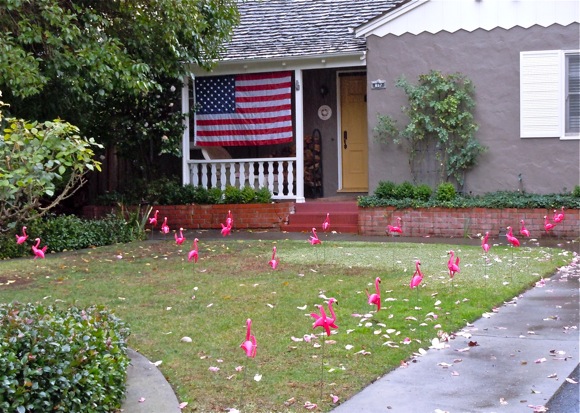 When Tracy Scandlyn, director of development at the Jean Weingarten Peninsula Oral School for the Deaf, offered parents $100 seed money to jump start a fundraising project of their choice, Menlo Park residents Kelli and Michael Agnich took her up on it. Then Kelli started researching unique fundraising ideas on the Internet and discovered flocking.

“Our daughter Landry, who is now three, was born profoundly deaf in both ears,” said Kelli. “She got cochlear implants at 9 1/2 months and now, thanks to the Weingarten School, has typical hearing and speaks well and listens. 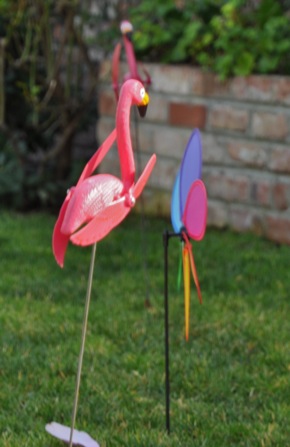 “So we were really motivated to support the school and I thought Menlo and our friends had had enough subscription dinners and similar fundraising efforts. So when I found out about flamingo flocking, which seems to be popular in the Midwest and East Coast but hadn’t yet migrated to California, I thought perfect.”

Kelli spent $90 of the $100 on 30 shocking pink lawn flamingos whose wings spin in the wind and two four feet tall plastic inflatable flamingo “whose job it is to watch over the flock.” To date the flamingos have wound up in well over a dozen yards, arranged in a completely random or celebratory manner.

With each “flocking,” comes a note: “You’ve been FLOCKED by Landry Agnich! For a $20 donation to the Jean Weingarten Peninsula Oral School for the Deaf, Kelli & Michael will remove these sexy beasts from your yard. For an additional $5, this flock of very social birds will be moved to the residence or business of your choosing. $5 more guarantees that you won’t be flocked again this year!”

“It’s been a hit, one that is so popular, I feel like I’m running a side business,” said Kelli.  “We’ve  decided to order more flamingos and continue this as a school fundraiser because it has been such a financial success and people are having a great time waking up to a flocked yard!”

Kelli and Michael’s flock has inspired the creation of two Dallas-based flocks. “My parents have gotten into it,” said Kelli. “Their running all over Dallas acting like teenagers toilet papering a house!

“I’ve raised $1,085 to date.  My parents have raised almost $2,000 in Dallas with a single $1,000 donation from someone who I haven’t seen since I was 10 and has never met Landry. I guess you just never can tell how these things will play out!”

You can follow both the Menlo and Dallas flocks – and find out how to purchase Anti-Flocking Insurance – at the Agnich’s Flock a Friend Fundraiser blog.

The “victim” must make a donation to the congretation to have the birds removed (usually between $10-20, but a free-will donation can usually net upwards of $100 at a time!) Part of the fun is that the victim gets to choose they next house that the flock lands on. The shepherds move the flamingo flock to the next house and the process begins again.

the plastic flamingo may be singing its swan song after inspiring countless pranks – and being alternately celebrated as a tribute to one of nature’s most graceful creatures and derided as the epitome of American pop culture kitsch.

successful pink flamingo fundraiser is to pick the flamingo “board” which consists of a president whose job it will be to organize the event, which includes making announcements about the event to the church, charitable organization, school, or whoever will be on the donating side of the equation; a secretary to keep written notes on everything that goes on, who has been flocked and who has chosen to pay insurance to avoid a flocking (more on insurance later), and to write press releases to keep the buzz going