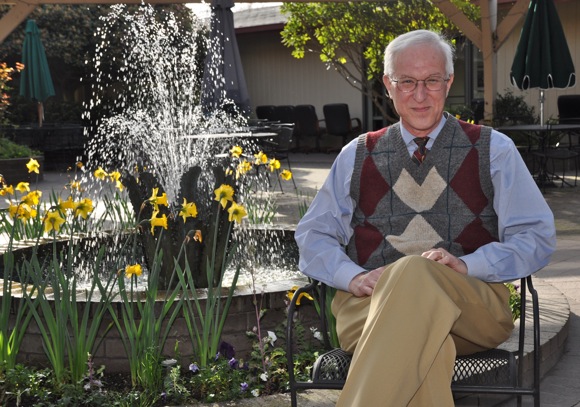 The Peninsula Volunteers (PVs) have been a force on the mid-Peninsula for six decades, raising millions annually to fund programs and services that benefit senior members of the community. “The organization is directly operated by its members and board,” Bart said. “The women are smart and passionate — and they care. It’s why they’ve succeeded. They are truly committed to funding the programs.”

One of the PVs major fundraisers is the Authors Salon, which will be held this year on Sunday, April 10.  Featured authors include Barry Eisler, Bo Caldwell, Robert Hirst, Simon Winchester, and Patricia Lopes Don. More information and tickets are available by calling (650) 326-0665, ext. 238.

Rich programs that meet the needs of today’s seniors

Administratively, Bart has begun to make some changes. One is to alter the atmosphere of Little House, so that “people feel as welcome as they would in their closest friends’ homes.” He’s modifying communications — there’s a new PV blog. And he’s intent on getting the word out about the breadth and depth of the programs.

“Little House is huge in programs and quality and the number of people we serve,” he said. “All of it is fun and warm. We know we are extending the years of the quality of life people are having.

“Rosener House isn’t just for people with dementia. We’re serving people with traumatic brain injury and Parkinson’s Disease — people who are not safe at home alone. And these people aren’t just those over 60.

“Our nutrition services are broader than Meals on Wheels. We offer coffee service in the morning and a tasty, midday meal five days a week. I emphasize the “tasty” part because they really are.

“We’re just finished refurbishing Crane Place and are starting to look into the possibilities of building new subsidized housing.”

“There is a whole new population of seniors that have arrived,” he said in conclusion. “They are the boomers. There needs at heart — nutrition, fitness, relationships, intellectual stimulation — are not really different, but they express differently. We are starting to fulfill their expectations now.”