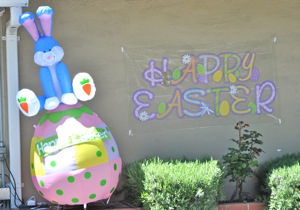 You probably don’t need to be a member of the clergy to be asking “Will Easter ever get here this year?” Yes, it’s late. In fact, it hasn’t been this late for almost 150 years (going back to 1875 – there’s only so much time to spend on trivia research!) And was later only once in the 20th century – April 25, 1943. It won’t be this late again until, well anyone who is reading this won’t be here to celebrate – 2095. All that to say that the homeowners on Ravenswood in Menlo Park who decorate their front yard for all the major holidays, had to wait a long time to dust off the Easter inflatables.