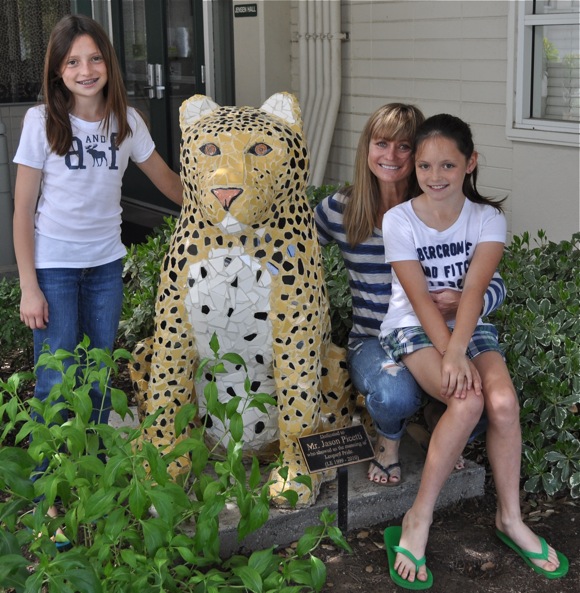 Though not classmates Sue Sartor and Katie Parsons share some common ties: they both graduated from La Entrada School, their children graduated or are set to graduate from the school, and they’re both living in the family home they lived in when they were students. And, of course, they plan to attend the 50th anniversary celebration of the school set for Friday, May 6 from 5:00 to 8:00 pm.

“I think it’s going to be really fun event,” said Katie, who’s on the planning committee – and who posed with her daughters, Paloma and Hannah, on the school campus. “Luttikens is providing a picnic style dinner and we’ll have frozen yogurt from The Mixt. There will be recess activities like four square, music from the jazz band and 50 years of La Entrada in photos. 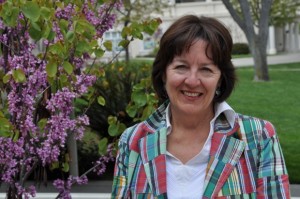 Sue is currently principal of Las Lomitas, the district’s K-3  school, and has the perspective of graduate, parent, teacher, and now administrator. “The strength of the Las Lomitas School District is that over the years, people change, structures change – but the level of program and quality has always been there.”

She was in the unique La Entrada class of 1967. “At that time, La Entrada was only 7th and 8th grades,” she recalls. “I was at Ladera [now leased as Woodlands School] but they didn’t have enough space so I went to La Entrada when I was in 6h grade. We were the overflow class, not quite part of the school but there physically.” 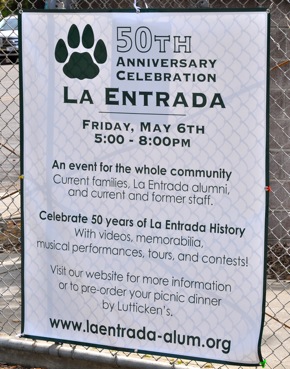 Both Katie and Sue have fond memories of their time at La Entrada. “For me it was all about my friends and teachers,” said Katie. “I’d moved to Menlo from the Philippines and I was super shy. But everyone was so great to me. I’m still close to a lot of my La Entrada friends.”

Sue also moved into the district midway through elementary school. “I was 10 and couldn’t believe that La Entrada offered Spanish,” she recalled. “I thought that was the coolest thing ever. I continued to take Spanish all through college and landed my first teaching job because there was a need for Spanish speaking teachers.”

If you’re interested in learning more about the history of the Las Lomitas School District, a 64-page book was compiled by former La Entrada teacher Nancy Lund at the time of the Las Lomitas School centennial. Nancy had the assistance of Menlo Park Historical Association member Frank Helfrich, who himself attended Las Lomitas. The book – filled with memories and photos – is available for download on the District’s website (link is near bottom of the history).

hi i love that picture