Catching up with John Paye about life as a parent 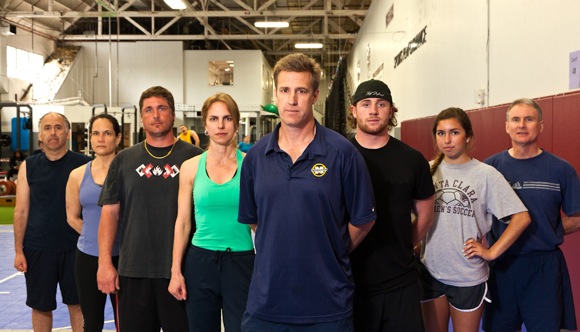 During the 80s it was almost impossible to pick up a local sports section and not read the name John Paye. A three-sport player at both Menlo School and Stanford, he also played for the San Francisco 49ers. Today, he juggles a playbook of a different kind.

“In a way, my quiet time is when I’m here,” John said, sitting in his office at Paye’s Place, an athletic facility serving youth and adults that he’s operated since 2002. “I have four kids at four different schools in Menlo Park and Atherton. When they’re in school, I’m here and when they’re out of school, I’m coaching youth sports.”

We talked about how he stays fit — he works out with the facility’s noon boot camp (John is pictured, center, with participants) at least three times a week. He says he should pay better attention to his diet: “I try to stick to three meals a day. I think staying structured is important.”

But mostly he talked about growing up in Menlo during a very different era — “we rode our bikes everywhere, no one drove their kids to school” — and the importance of family in his life. He and his wife Danielle have four children, three girls and one boy, who is a special-needs student at Woodside High School. And while he may be somewhat nostalgic for the slower pace of life when he was growing up, he’s appreciative of how special-needs kids are treated and schooled today.

“When I was in grade school, the special-needs kids were isolated,” he recalled. “They were made fun of. Today Jack is well-accepted by the community.”

John said he never pictured himself married with four kids, but he’s clearly embraced family life. “I used to spend six to eight hours playing sports and now that time is spent with my kids.

“As I’ve come to realize how challenging it is to be a parent, I gain more and more respect for my Mom and Dad. They always had time for us kids. Kids today are so highly scheduled, and in many respects, I don’t think parents have as much individual time with their kids.”

John mentioned that he’s been affiliated with a school or sports team his entire life. It’s not something he wants to change. “In 20 years, I’d still like to be living here, watching my grandchildren grow up, and coaching their teams.”