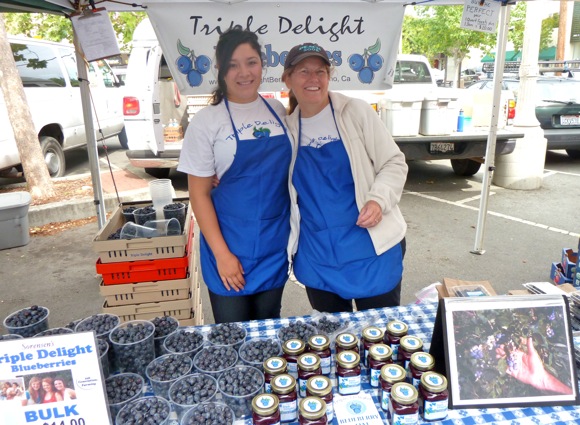 First there was the arrival of Brooks cherries a couple of weeks ago. Then appearances by peaches and apricots. It’s starting to look a lot like summer at the Menlo Park Farmers Market.

That fact was solidified this morning by the annual appearance by Triple Delight Blueberries from Mark and Kimberly Sorensen’s farm in Caruthers, which is near Fresno in the San Joaquin Valley.

“The season is usually mid-May to mid-July, although it seems to get started later each year due to the weather,” said Diane Nelson (photo, right) who was at the farmers’ booth along with Tania Garcia.

The Sorensons are fifth generation raisin farmers who first planted five acres of blueberries in 1996. Triple Delight is not a variety. Rather, the operation was named for the couple’s three “delightful” daughters. All of their blueberries are sold direct to consumers at farmers markets in Northern and Central California. Ten additional acres were added to the operation in 2006, which expanded the number of varieties planted.

It was the Star variety being sold this morning. Diane explained that Triple Delight will only be at the Menlo market for about a month.