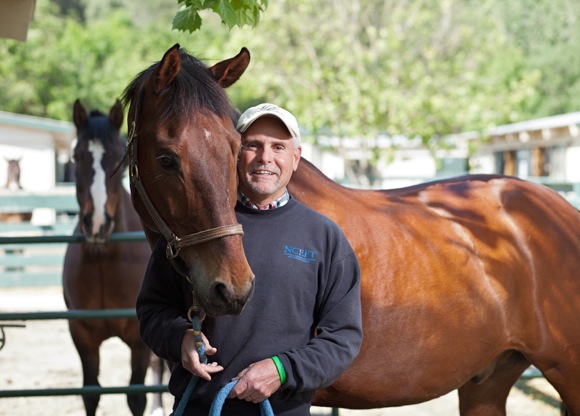 Sometimes mysteries get solved when you’re least expecting it. People who walk along Vine St. in the University Heights neighborhood in Menlo Park have undoubtedly noticed sculpture scattered amidst the plants. Who is the artist and how did they get there? The answer is Gari Merendino, who’s lived there for 27 years — and, we would learn, is something of a jack of many trades.

“It’s a great little neighborhood and it was a wonderful place to raise kids,” he said, sitting on the spacious second floor of the barn at the National Center for Equine Facilitated Therapy in Woodside, where he’s Executive Director.  “When we moved in, there were tons of families with kids our kids age. Now we’re seeing the next generation of families, carrying on neighborhood traditions like the summer Friday Frolics.” 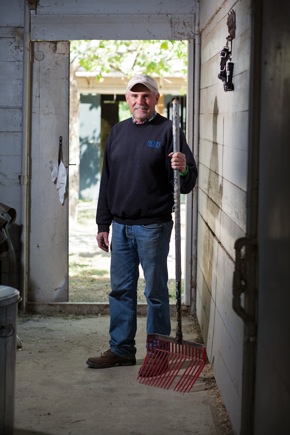 How the part-time sculptor and former retail executive — he worked for both Levi Strauss and Mervyn’s — finds himself running a non-profit that involves horses is a mini mystery of another sort. Like many in the economic downturn that followed the dotcom bust, Gari found himself unemployed. Finding that he could only do so much job hunting in one day, he started volunteering at NCEFT. When he found other employment, he continued to volunteer.

“I’d gotten introduced to horses when I was in my 20s and liked them, and the idea of helping kids be safe on horseback appealed to me,” he said. “So I started to volunteer and immediately found it really fulfilling.”

The non-profit NCEFT, which Gari joined as a full-time employee in 2008,  is celebrating its 40th anniversary this year. The organization helps children and adults with special needs move beyond their boundaries through the healing power of horses. Riders improve their balance, posture, mobility, coordination, and strength on horseback. For those  unable to sit astride a horse, carriage driving is utilized, so they still get the sensation of having a pair of reins in their hands.

While NCEFT now has special programs for military veterans as well as developmentally disabled adults, children make up about 90 percent of its clients. “We aren’t just treating the kid, we’re treating the family,” said Gari. “A child with special needs requires care 24/7.  So when the caregivers come here, they can relax and read a book while the child is riding. If there are siblings along, they can go pet the donkeys. Our goal is to create an environment where they whole family gets treated.”

As part of the anniversary celebration, NCEFT is holding a fundraising event, a Fun Day/Poker Ride & Walk, on June 18 where people can ride or walk the grounds of the nearby Runnymede Sculpture Farm. Details about the event are on the organization’s website.

“We need to pull in 50 percent of our operating budget in donations, so ongoing fundraising is always a priority,” said Gari, who also underscored that NCEFT staff wear many hats. “But we also couldn’t operate without our many volunteers. Some are individuals. You don’t need to know anything about horses, we’ll find a job for you! In addition, local companies send in work crews for a day to paint or work on facility maintenance.”

Gari and the rest of the staff also work hard at partnering with other non-profits. The Menlo Park-based Peninsula Volunteers just used the facility to raise funds for its programs benefiting seniors. Other nonprofits come just to enjoy the ambiance; a group from Abilities United has frequent lunches under the trees.

“If I’m always asking for money, I try to give back,” said Gari. “Making our wonderful facility available to community groups and other nonprofits is one way.”