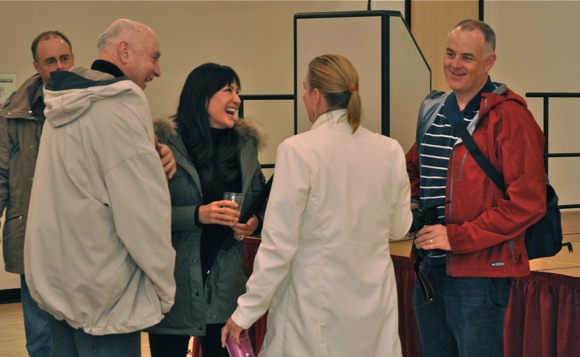 After a four month renovation, the Arrillaga Family Recreation Center opened to the public this morning — and it’s spectacular from top-to-bottom. “After 47 years, we basically have a brand new facility,” said Menlo Park civil engineer and project coordinator Matt Oscamou, referring to the center which first opened in 1964.

The new facility cost the City $2.1 million, with the rest of the funding the result of a generous gift from John Arrillaga, who was on hand along with family members to tour the facility and receive a proclamation of thanks from Mayor Rich Cline. (Arrillaga and his wife are pictured with Menlo Park Mayor Pro Tem Kirsten Keith and her husband.)

In a short address, Oscamou outlined the improvements and additions to the center. Installation has been added throughout, as has LED lighting, which is 30% more efficient. “There’s a lifetime of light in this great space,” he said. 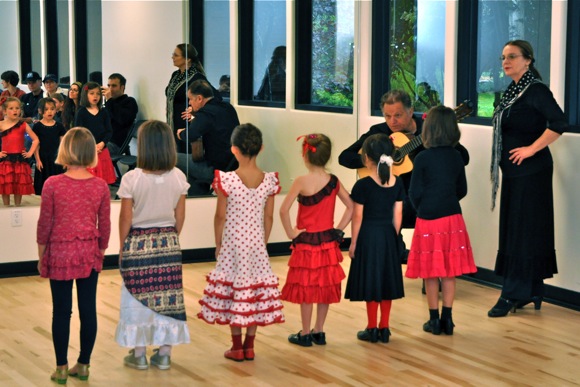 The fully renovated dance and fitness studios, serving both children and adults, have gleaming new floors as do the hallways and other public spaces. There’s also a new space, the Oak Room, which leads out to a pretty patio. The City is promoting the facility as rental space for birthday parties, anniversaries, weddings, memorials and corporate events. Good photographs of available space and rental costs are available online.

Activities this morning focused on showcasing the various classes available at the center, including flamenco dancing for both children and adults taught by Rubina 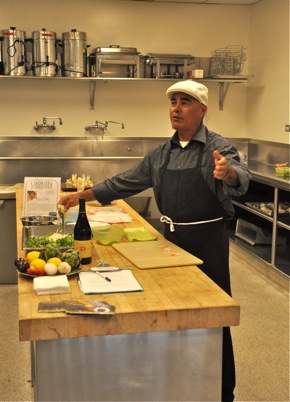 Said Mayor Rich Cline in presenting the proclamation to Arrillaga: “The real credit goes to John Arrillaga and his family. Using a sports analogy, the City of Menlo Park always needs to fall forward. John Arrillaga bowled over the obstacles to make this happen.”

The City has another gift from the Arrillaga family in its future. The old Burgess Gym is being demolished and will be replaced by a new gymnastics center, set to debut in Spring 2012.