Rubina Valenzuela: Sharing her passion for Flamenco with children and adults through new dance classes at Burgess 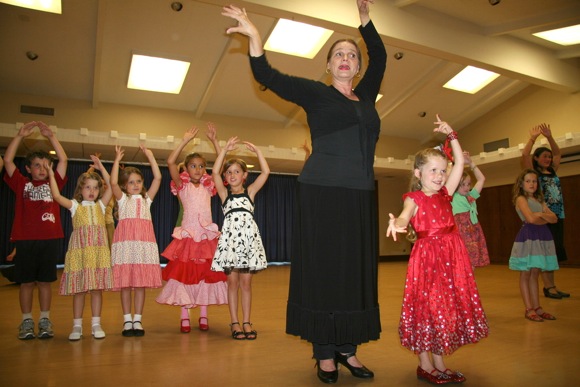 Today marks the first day of registration for Menlo Park’s fall recreation classes for city residents. And dance teacher Rubina Valenzuela hopes that would-be students don’t delay signing up. She’s looking forward to introducing flamenco to a new crop of students and wants to ensure that class minimums are met before lessons start on September 8.

Rubina’s new class, Flamenco for Kids, debuted in Menlo Park over the summer, and it was a big hit with kids and parents alike. The class teaches children ages 5 to 11 basic rhythms and choreography of the traditional Spanish dance. Rubina conducts the lessons in a blend of Spanish and English so that students can learn simple Spanish words and dance commands. 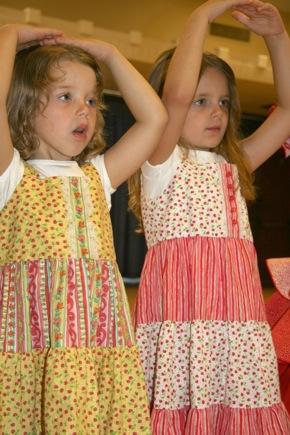 This combination of dancing, singing, and Spanish language has been a draw for many of her summer students who are part of the District’s new Spanish Immersion program. Many had learned about the class because Rubina has worked with some of the District’s teachers on special lessons and events, like Encinal’s school-wide Cultural Arts Day, which featured Spain.

We had the opportunity to sit in on one of Rubina’s summer sessions and were quickly drawn in to the fun and immersive experience. As it often does, the lesson featured flamenco guitarist John Richter, one of Rubina’s long-time collaborators. After gathering in a circle to review songs and rhythms, it was time to practice dancing — parents included. A little awkwardly at first, they attempted to keep up with the kids. “Having the parents also dance helps them to help the kids, and everyone has fun,” explains Rubina.

From Menlo Park to Spain and back again

Rubina, who has raised her own five children and now grandchildren here, has been practicing her craft for 30 years. Following a life-long dream, she had the opportunity to study in Spain and has had a successful dance career locally and abroad. Today, however, she no longer performs as a dancer but concentrates on teaching and running her production company.

Along with the children’s class, Rubina will also teach adult flamenco classes (beginner and intermediate) at Burgess. She hopes all of the classes will become popular with the local community, but beyond that she has another wish, “My dream is to have an after school program where I could work with the children all year and conclude with a performance.”

I’m the artistic director for a dance company. About sixteen years ago or more a flamenco singer by the name of Rubina Valenzuela did work with us. It was a wonderful experience to work with her, she understood the apprentices dance lavel. I have been looking for this singer for long time, for varius of our events without results. Hope to find some information so that she will get in touch with me.
Thanks for your collaboration, Marisel