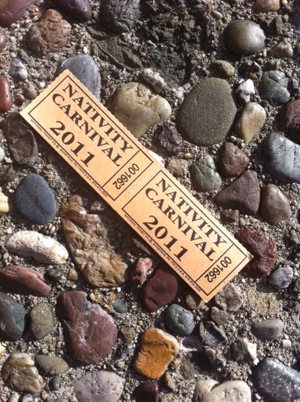 Just like every year, the Carnival comes and then it goes. About a block from the festivities, we spotted a couple of tickets on the ground, a reminder of the weekend fun.

While Carnival co-chair Steven Machado doesn’t yet know how much was raised, he thinks attendance was in the mid-range this year, probably around 8,000. “People liked the new layout and we got great support for the silent auction, which featured a lot of sports memorabilia and vacation packages.”

He also said the sit dinner featuring rotisserie chicken and tri tip sold out. “The Bell Brothers were a huge hit,” he said. “Scott Bell teaches at Nativity so that’s why we were fortunate to have a band that’s opened for really big touring bands. They really got the crowd dancing.”