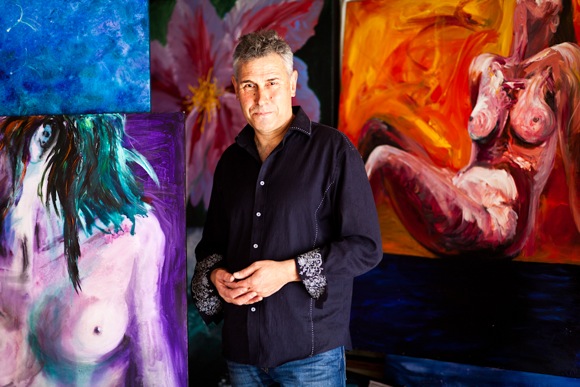 To hear artist Tim Christensen tell it, all his life he’s been surrounded by women. He has four sisters as does his wife. And it was the study of feminism that brought him from New Zealand to California. So it’s not surprising that the human form has been a consistent subject since he seriously turned to painting.

“When I was getting a Certificate in Studio Art at Berkeley, I was deeply influenced by the Bay Area Figurative School,” he says, sitting amidst an array of bold and colorful canvases in his home studio in Menlo Park. “While I’ve done some seascapes and flowers, figures inform my art more than anything. Figures are the most challenging and the most interesting. I try to work with a live model at least once a week. I love the way models move and change position so quickly.”

Tim jokes that his “punishment” for studying feminism is that he and his wife have three sons, all under the age of 7. After 20 years of teaching elementary school, he’s choosing to be a stay-at-home-dad. “I thought I’d be able to paint more,” he says with a smile. He keeps his fingers in elementary education by volunteering at Laurel School a couple times a week and occasionally having kids from the nearby German-American International School come by to paint with him.

To keep the art flowing as he juggles family responsibilities, Tim takes regular classes at the Pacific Art League. “I’m pretty wild,” he says. “I squirt and splash paint and throw my canvases on the ground. I scratch the paint with a palette knife and re-layer it.

“To me, the main thing is not thinking, not intellectualizing the work. Instead, just do it.”

Tim took part in the recent Silicon Valley Open Studios and his paintings can often be found at Cafe Zoe. He can be contacted through his website.