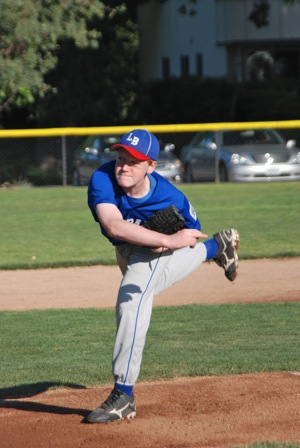 Editor’s note: We got this update/perspective on last Friday’s city Little League championship from Brian Rodrigues, coach of Left Bank:

“In the Majors game between M-A and Alpine, Alpine jumped out to a quick lead behind some big hitting at the top of their batting order. Left Bank battled back, with the help of a mammoth home run by David Farnham (pictured) — his 11th of the year — to make the game closer. Alpine however was able to hold on for the 11-5 victory.

“The winning coach/team gets to take home (and hold for the entire year), a large wooden and brass trophy. The trophy has been in existence for over 50 years, and has the winning team engraved for each year. The trophy, along with the friendly community rivalry, makes for a long standing tradition.”