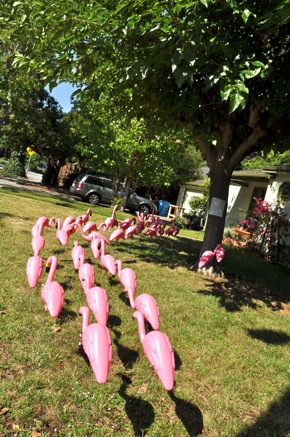 We didn’t get over to the flamingos neighborhood in the Willows until today, and while the 4th of July may be passed, the pink plastic birds were still in a patriotic salute of sorts. A copy of the Declaration of Independence had been tacked to the tree, and the flamingos appeared to be somberly marching by. Maybe they were stopping to sign it.

No more flamingos….
The house seems to have a new family living there, and no sitings of flamingos for a couple of weeks. Yard sale 2 weeks ago…. followed by an empty house, and a new family … miss the flamingos 🙁