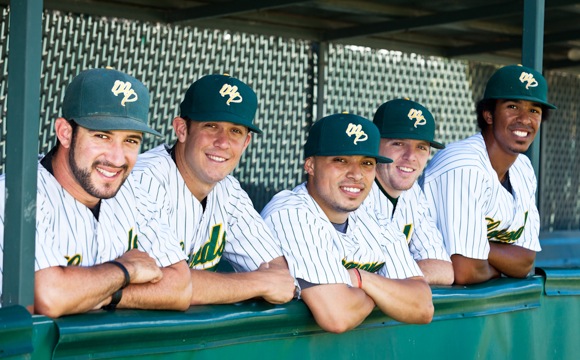 They suit up six times a week, often traveling miles to play the most competitive teams. What these largely college-age players share is a love of baseball.

That they get an opportunity to play in a summer league is thanks to team manager David Klein, who founded the Menlo Park Legends three years ago. When an observer asked if the team’s green and gold colors were patterned after another local team, the Oakland As, he offered a closer to home reason.

“Menlo Park is the tree city,” David said. “I looked around and everything was green, so I chose dark green for the color.”

David, who catches when he adds his name to the line up card, graduated from Menlo-Atherton High School in 2005 and played two years at Santa Barbara Community College before continuing his studies at UCSB, where a torn Achilles tendon prevented him from playing his junior year. A member of the  M-A Baseball Hall of Fame, he is joined by four other M-A grads on the Legends.

Skylar Brewer (first base/outfield), Corey Zirbes (left-handed pitcher) and Jonathan Abramson (right-handed pitcher) followed David by a year at M-A. They’re each on a bit of a different sports journey, but all remain committed to playing baseball.

Skylar, who’s father and uncle both played major league ball, has finished his collegiate career. “I’ve always had a passion for the game,” he says. “Now that I’m back home I’m working with my agent trying to get a rookie contract.”

Corey continues to play collegiate ball at Sterling College in Kansas City, Kansas. “I played with the Legends all last summer and a little bit the summer before,” he says. “Hopefully I can continue to play baseball, but school is most important.”

A recent graduate of USF, Jonathan is particularly proud of the fact that his collegiate team went to the NCAA regional tournament and beat UCLA. “For one game, we pitched just a little bit better and beat them,” he says. “I got to start the third game of the three-game series.”

He admits that he’d hoped to be selected in the baseball draft. While he doesn’t have an agent, his coach at USF is keeping an  eye out for him. “If I don’t’ get an opportunity to continue to play, I’m hoping to stay in sports,” he says. “My degree is in communications — I love sports and I love to write.”

Most recent M-A grad (class of 2009), Abi Arias plays both second base and left field, preferring the latter. His older brother Josh also played for M-A. He has one more year at the College of San Mateo and is having a good year at the plate with the Legends, batting .300. “I hope that I’m on the path of playing pro ball, but leaving the option open to transfer to a four-year college.”

With a record of 25 and 16, the Legends season is almost over this year. They have six more games to play, starting this afternoon (7/26) at 4:30 pm at Menlo College. “It’s gone by so quickly,” said David. “As with any season, there have been ups and downs. I planned the most difficult schedule possible. That’s meant a lot of road trips — we’ve been up and down California. Next year I’m hoping to build the fan base with more home games.”