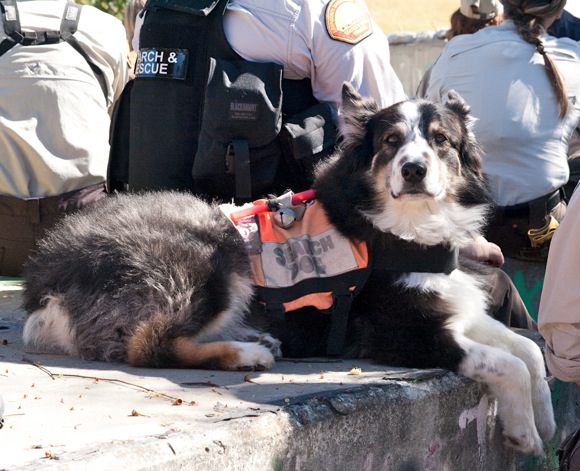 Anyone at SLAC last Sunday might be forgiven for thinking it had been turned into a dog park – one SLACer was even heard to remark, “Hey, SLAC’s having a Puppy Bowl!” – but the more than 80 dogs and their handlers in attendance at the California Rescue Dog Association (CARDA) regional workout were all business.

The SLAC-hosted exercise began with a mandatory safety briefing at 8:00 a.m sharp, followed by a full day of sessions covering everything from obedience and agility to wilderness tracking, cadaver work and nosing out volunteer “victims” of a simulated urban disaster. The exercise greeted with the least relish by both dogs and humans consisted of strapping into a harness and being hauled up the side of Building 640 (pictured below right). While the dogs took a break, their handlers could attend lectures on such topics as scent theory, how to approach a crime scene, urban search strategy and sizing up the scene of a structural collapse.

According to Brandon Bond, director of the Office of Emergency Management for 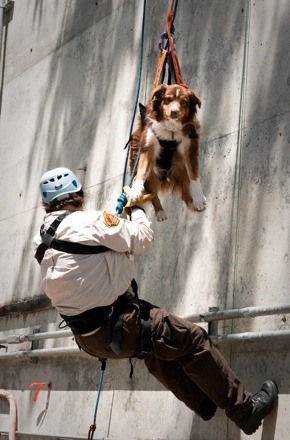 Stanford Hospital and Clinics and the “incident commander” of the CARDA exercise, the focus on search and rescue operations at an urban disaster site was motivated by a relative scarcity of California dogs and handlers qualified for urban areas. “These dogs are wilderness dogs,” he said – trained to track lost hunters or find overdue hikers. “Currently if there’s an urban disaster in the state of California we need to wait for FEMA teams.”

California has a total of eight Federal Emergency Management Agency teams with 55 certified canine teams, including California Task Force 3 located in Menlo Park, which participated in the exercise along with California Task Force 6 from Riverside. California FEMA teams would be able to quickly provide resources for local disasters, but, says Bond, “if we can get all our teams certified we’ll have 143 more dogs in the state of California ready to respond.” It takes about two years for dogs and handlers to pass the California Emergency Management Agency’s requirements for canine urban rescue teams, Bond said, and the SLAC exercise was the first opportunity for the CARDA teams to begin the process.

The approximately 20 dogs in attendance at the first urban disaster session snoozed, got their bellies scratched, or simply waited patiently while their handlers listened to a lecture about proper safety equipment and how to find and shut off utilities. Dogs and handlers would soon get an opportunity to sniff out “victims” hidden in the expanse of jumbled concrete blocks and other rubble adjacent to the SLAC linear accelerator that doubled as a disaster scene.

“This is a perfect rubble pile for introducing wilderness dogs to an urban environment,” Bond said. “It’s a safe, stable setting.”