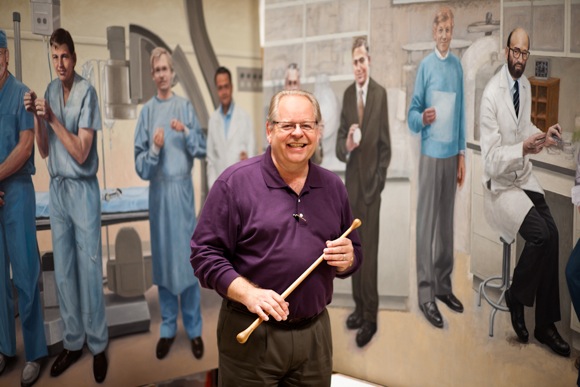 Walk into artist Terry Guyer‘s Menlo Park studio and you’re immediately surrounded by the science and technology pioneers of Silicon Valley. For the last five years, Terry has been under contract by patent attorney and real estate developer Harold Hohbach, founder of the Silicon Valley Luminary Society, to paint group portraits of inventors, shown at the age when they made their inventions. He has completed five paintings and is now working on the sixth.

“Harold had hoped to raise funds through the Luminary Society, but we’ve been through two downturns since the project began,” Terry said. “So he’s been self-funding the project and remains committed to completing it.

“The paintings are challenging to do. I have to use multiply photos just to get each face right. It’s extra agonizing because there is so much invention that goes into each of the portraits. The upside is that I’ve gotten to meet most of the inventors who are still alive.”

Terry graduated from the Minneapolis College of Art and Design, earning a BFA. “When I was in art schoo,l I did surrealism,” he said. “But my junior year abroad I got involved with classical work. After art school, I worked as a chef to make a living. I wanted to do something that would get me out of the Midwest, which I really didn’t like.”

After moving west to the San Francisco Bay Area, Terry started to pick up some graphic design and commercial work, which prompted him to return to art school, training at both the Pacific Art League and the Academy of Art. “When I was in art school the first time around, it was during the ‘do you own thing’ era,” he said. “I went back to actually get trained.”

It was while Terry was at the Academy of Art that he discovered portraiture. Not only did he really enjoy it, he found he could make a living doing it, although he continued doing commercial illustration as well.

“I find it really hard to paint all the time,” he said. “I paint about four hours a day and am exhausted. Massive projects like the Luminary Society paintings have sort of taken over my life, but I would like to get back to doing individual and family portraits.”

For these commissioned portraits, he takes multiple photographs and likes to have at least one in person sitting to get to know his subjects better. “Painting portraits is very personal,” he said, “but I get the opportunity meet and work with wonderful people.”