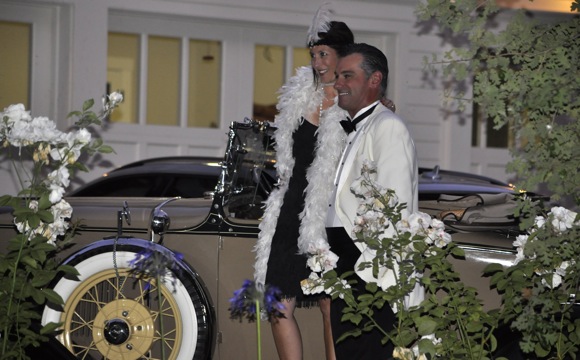 The Menlo Park Atherton Education Foundation kicked off its fundraising efforts for the 2011-12 school year with a Gatsby themed party in Menlo Park on Saturday night. The Foundation supports professional development for teachers, educational instruction in music, art, and hands-on science, librarians, and educational innovation.

“This year, the annual campaign, which officially kicks off on Monday, August 29, demonstrates how the community comes together to support its local schools.  For the first time, the MPAEF and the four schools (Laurel, Encinal, Oak Knoll and Hillview) have launched a joint campaign, called “Are You In?” to emphasize the importance of parents in our district supporting both of these key organizations — the local PTOs and the district-wide MPAEF.

“The state of California has cut $1.4 million from the district’s budget this year. The MPAEF’s goal is to raise $4 million, which adds the $1.4 million lost from the state as well as the amount raised last year, which was a record-high of $2.6 million.

“The MPAEF is urging the community  — including local businesses — who value quality public education in Menlo Park to help the organization meet its goal.”

More information about “Are You In?” is available online. And yes, for the eagle-eyed among you, that’s Bruce Deal’s Model A parked outside to help get party goers Diana and Mark Baker in the mood.