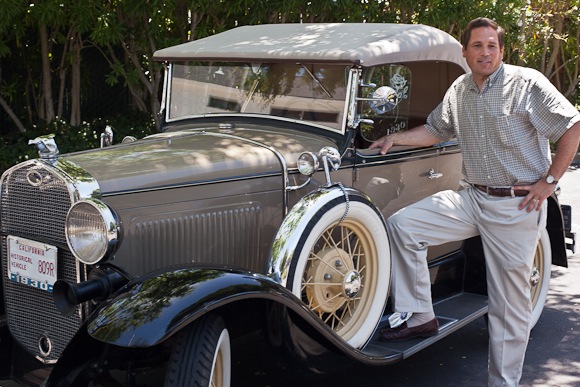 The 1930 Ford Model A Roadster that locals hear tooting its horn around town — and can catch a glimpse of in the upcoming Menlo Park 4th of July parade — has been in Atherton resident Bruce Deal’s family since before he could drive.

“My father is a bit of a collector,” says Bruce. “He also has a 1923 Model T and a 1913 “T” that was one of the originals with the hand crank. When I was a kid growing up in Wenatchee, WA, he used to drive them in locals parades. And when [wife] Lisa and I started dating in high school, I’d drive the Model A to dances.”

The car has been at the Deal home for the past five years. With his Dad not driving it much, Bruce took the opportunity to bring it to the Bay Area so that his three kids could have the same kind of fun with it that he remembered having when he was growing up. 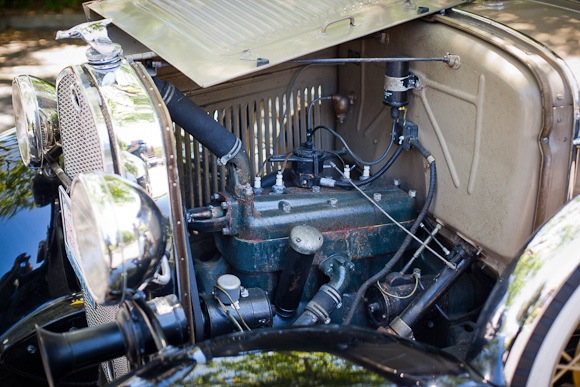 The Model A was the first Ford to use the standard set of driver controls with conventional clutch and brake pedals, throttle, and gearshift. Bruce’s car is “the real deal, not the hot rod version.”

The challenge of owning a Model A is that “you just can’t drive it down to the Ford dealership.” Instead, you need to find an expert/enthusiast. Bruce accomplished that by joining a local car club and finding that Sam Asara is the “go-to guy for Model As.”

Earlier this year, he had Sam go through the car top to bottom mechanically and replaced the soft convertible top with a new one. “The fun about owning an old car is that guys of a certain age are quick to come up with their stories of when they owned one,” says Bruce. “Inevitably they all start out the same way: ‘I bought it for just $100 and…!'”

Editor’s note: Have an interesting ride? Let us know: tips@inmenlo.com!