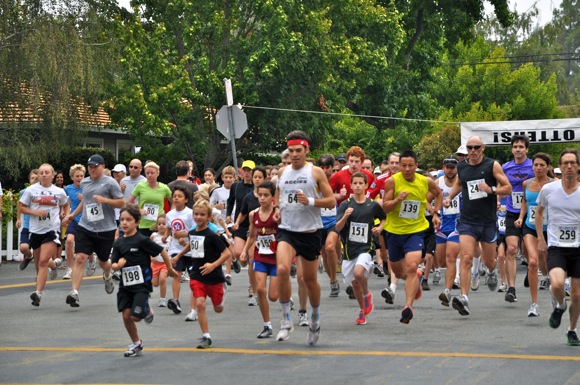 Showing a distance runner can master shorter races, Stanford grad Chris Mocko (number 64)  went wire to wire to win the Kids 4 Sports run this morning in a time of 15.07. Categorizing his participation as a “kick off,” Chris said he hasn’t been doing much competitive running lately. 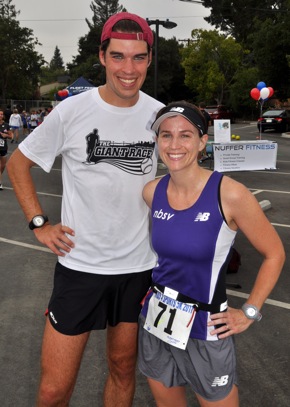 that plan,” he said, explaining that a new job with mobile payments startup Square would mean moving from Palo Alto to San Francisco. “I entered this run to support the Ko family whose child just entered kindergarten at Oak Knoll.”

Crossing the finish line in a time of 21.23, the female winner was Menlo Park resident Amanda Packel (pictured with Chris). Amanda, who runs for New Balance Silicon Valley and is the mother of a nine-month-old baby, said this was just her second race since giving birth. “I started running as a little kid and never really stopped,” she said.

This year 260 runners of all ages took part in the run (30 more than last year), the second fundraising event for Kids 4 Sports Foundation, which was 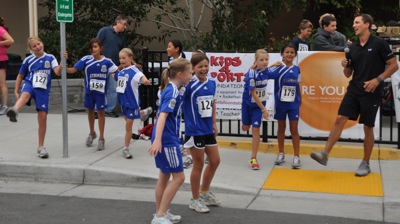 co-founded by Menlo residents Katie Ferguson and Sally Osterberg. Leading the warm up was Russ Nuffer (right in photo left), with the able help of the girls Strikers soccer team. The mission of the Foundation is “to promote healthy living and exercise by providing sporting equipment and after-school sports leagues.”