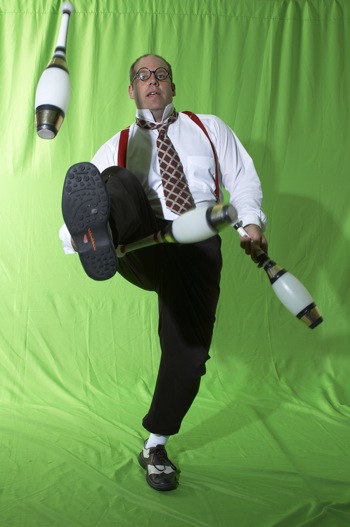 Steve Koehler was 12 when first bit by the magic bug. When he returned to magic full time in his 30s, his intent was to be a serious magician who performed for kids. “The kids let me know otherwise,” he says. “They wanted to laugh.”

“For adults, I do sleight of hand magic and some comedy,” says the longtime Peninsula resident. “But kids like super crazy absurd humor. And I’m lucky — doing comedy is a heck of a lot of fun.”

About two-thirds of his performances these days are as Mr. Horsefeathers, but he keeps the serious magic in tune doing corporate events. He’s also a ragtime guitarist, although he has yet to incorporate that into either of his personas.

Over the years he says he’s performed for a diverse group of kids, representing a wide variety of ethnicity and  faith traditions. “It’s interesting. The kids laugh at the same jokes no matter what. It’s a kind of beautiful thing — the humanity cuts through all cultures.

“The sound of laughing children is just wonderful. It’s the greatest perk of my job!”

We saw you at the Palo Alto market with our grandchildren, Matti and Magali.
When we’re back in Belgium I’ll send a few pictures.