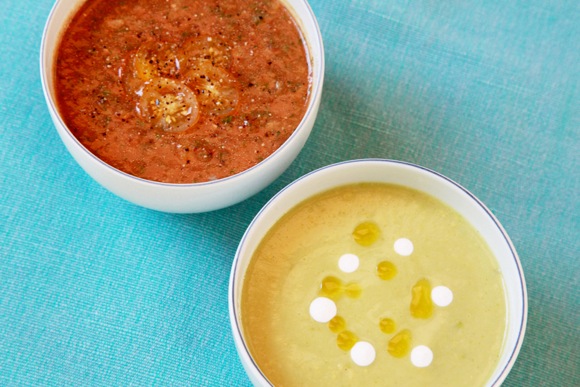 Editor’s note: Atherton resident Gillian Bostock is not only a talented, serious-amateur chef, she’s also an accomplished photographer. This is the last in her series of great summer recipes.

Undoubtedly, the bountiful pile of Ace tomatoes at the Ranch’s Farmers Market on Alpine Road in Menlo Park is an impressive site. However, it is really the taste of these enormous tomatoes, which weigh about a pound apiece, that will knock your socks off.

Manager Deano Lovecchio urged me to try Jesse Cool’s Chilled Tomato Soup from her Simply Organic cookbook (to which I added a few personal touches) and my taste buds and I would like to take this opportunity to thank him for that suggestion. The soup is a perfect way to capture the flavors of late summer in one delightful spoonful. The spices add just a hint of exotic smokiness and make it unlike any other gazpacho you’ve ever had.

The second recipe is for Chilled Corn Soup with Crème Fraîche and Cilantro Oil and is adapted from The Gourmet Cookbook. Picked three times a day — I repeat, in awe, three times a day — the corn from Webb Ranch is exceedingly fresh and couldn’t be more sweet and delicious. The key is to use just enough avocado and crème fraîche to thicken the soup but not so much as to detract from the Webb Ranch corn, which should be, and justly so, center stage.

Happy end of summer, everyone! See you in a month when I return with Fall recipes. (Ingredients and recipes follow below the photo of  Webb Ranch.) 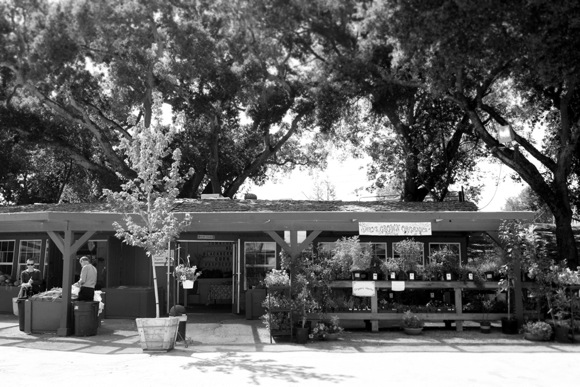 Chilled Tomato Soup
Adapted from Jesse Cool’s recipe in her Simply Organic cookbook as given to me by Deano Lovecchio. (Note: Jesse Cool is the owner of Menlo Park’s Flea Street Café and Cool Café.)

Directions
1. Put the chopped tomatoes in a food processor and blend until smooth.
2. Strain through a large sieve to remove seeds and skin. Discard solids. You should be left with a fragrant juice, sun-bleached red and fairly thick.
3. In a cleaned processor, add the basil leaves and chopped red onions. With the processor running, add the olive oil in a steady drizzle until combined. Scrap down the sides with a spatula and run a bit more. Add basil-onions-oil mixture to the tomato juice and stir.
4. Add the spices, finely chopped spring onions, sherry vinegar, as well as the zest and juice of 1 lime. Combine.
5. Add salt & pepper to taste.
6. Chill for at least 1 hour. Garnish with a few chopped cherry tomatoes and enjoy!

Directions
1. Cut the corn off the cob with a sharp knife. Then cut each cob into three pieces. Put cob pieces and kernels into a large pot with ½ cup of the chopped white onions and a crushed garlic clove. Add 4 cups water. Put on high heat and bring to a boil. Boil for 15 minutes uncovered.
2. Meanwhile, put the chopped cilantro into food processor. Add salt. With the processor running, add the olive oil in a steady drizzle. Scrap down the sides of the processor with a spatula and run a bit more.
3. Pour the cilantro-oil mixture into a bowl through a fine sieve. Don’t press down on the cilantro. Just let the oil drip out naturally. Store collected cilantro oil in the refrigerator until ready to use.
4. Now bring your attention back to the pot on the stove. Once it has reduced to about three cups, remove from heat and let cool. Discard cob pieces.
5. In a cleaned processor, add pot contents, the rest of the chopped white onion, and the chopped Serrano chile. Blend until smooth.
6. In a large bowl, pour the ingredients from the processor through a large sieve. Discard solids. You should end up with a milk-like liquid.
7. Put the “corn milk” back into a cleaned processor along with ¼ cup crème fraîche and ½ an avocado. Blend. Add lime juice. Blend again. Check consistency. If you would like it to be a bit thicker, add more avocado and/or crème fraîche. Blend some more.
8. Add salt to taste.
9. Chill for at least an hour. Then garnish with drops of cilantro oil and crème fraîche thinned with a touch of water.