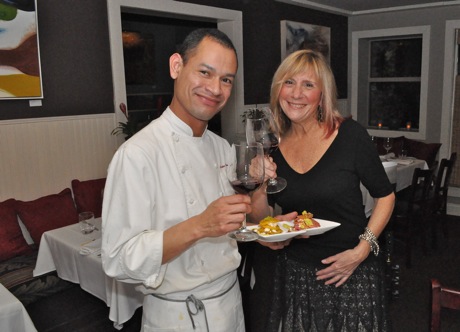 Can it be true?  Jesse Cool’s Flea Street Cafe – founded on the principles of local and organic – has been around since 1981, a very long life in restaurant terms.

The almost 30 years haven’t always been easy for the innovative chef/restauranteur. Cool, who opened her first restaurant in Menlo Park, Late for the Train, in 1976, said there have been many ups and downs. “I nearly lost everything in 2001,” she said, “but I refused to go under and hired a business adviser who taught me how to do more than just cook.”

Cool’s restaurants, which now include Cool Cafe at the Menlo Business Park as well as at the Cantor Arts Center on the Stanford campus, have always been focused on local – long before that became the fashionable way to do business. “I still get grief about not offering Oregon Pinots,” she said, “but we live here in California and have good wines.”

If Cool has embraced her local community, the community has, in turn, embraced her. “This community has kept me alive,” she said. “It’s supported a belief system since the day Bob Cool and I opened Late for the Train. It was hard. Today I feel humbled to be in the mainstream.”

Cool grew up in western Pennsylvania watching her father grow produce in the backyard. The first thing she did when she arrived in the Bay Area was to sign up for the Briar Patch. At the time, it was hippie thing to do.

Business at Flea Street  is up 20%, and Cool thinks the “secret” is tried-and-true over trendy. “Our food has always been simple,” she said. “Because there’s more acknowledgment about local and organic, more people want to work here. And I’ve been able to upgrade a bit. The staff is phenomenal. [Flea Street’s chef is Carlos Canada, pictured with Cool; the restaurant is managed by Julianna Forneris.] They are now the champions – I’m now the matriarch. It’s really cool.”

Nice picture. Can’t wait to try this restaurant again. Someone else mentioned it to me recently as being excellent.

Late for the Train opened soon after my wife and I moved to Menlo Park with our young daughter. We loved going there on Sunday mornings, reading the paper outside on a warm sunny day while waiting for a table, and then getting a very innovative brunch served by a very interesting staff. We’ve been followers of Jesse Cool and her restaurants ever since: the new Late for the Train on Middlefield (now Mike’s Cafe) and then Flea Street Cafe. We were sorry to see JZCool leave downtown (although we now like Mataro’s) since it was an easy walk from our house. As many people know, for many years Jesse’s father was a colorful regular among the vendors at Menlo Park’s Farmers’ Market. Altogether it’s another piece of what makes Menlo Park a special place.