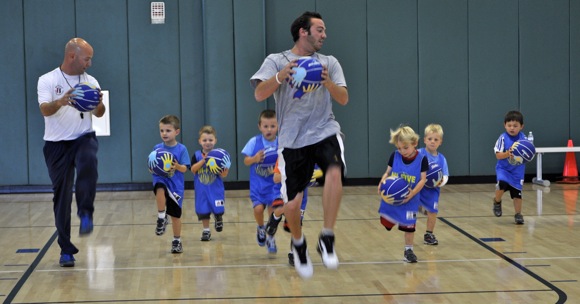 The sound of bouncing basketballs in the Arrillaga Family Gymnasium is what you’d expect, yet different. That’s because the kids with the balls are pint sized.

Hi-Five Little Ballers is a new program for three- to five-year-olds offered through the City of Menlo Park by the Hi-Five Bay Area Sports Clubs, which is run by Nate Birnbaum (pictured above, left), long known in the East Bay as a top youth golf instructor. While new to the Peninsula, Hi Five has been running youth sports program in the Chicago area for 20 years. 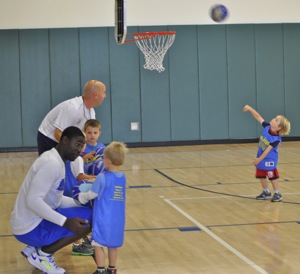 get stuck in the virtual world,” said Nate. “We believe there’s more to childhood than staring at a screen. Menlo Park was selected as our first city because of its Silicon Valley location and the potential for reaching young kids — and their parents — and instilling a passion for sports.”

The first basketball programs for the preschool set began Friday and Saturday (9/9 and 9/10.) Danny Tuchman (top photo, center) was in town from the Chicago program to help kick things off, although Mani Messy (above, kneeling) will be regularly leading the program. Mani attended Seton Hall University on a basketball scholarship, graduating in 4 years, and played professionally in Europe. He’s spent the past two years coaching. Nate hopes that the current Hi Fivers will prove to be a training ground for a K-2nd grade league in January. The organization also plans golf classes for three- to five-year-olds in October.

“Our emphasis is helping these young kids develop their ability to run and jump,” said Nate. “It’s not like a training camp. We want the kids to leave the classes thinking they’ve had the time of their life.”

Information about current and future programs, including sports camps, is available on the Hi Five Area Sports Club website and in the City of Menlo Park’s Activity Guide, which was mailed to residents; copies can be picked up at City Hall.