Three faith traditions under “one tent” at 9/11 remembrance service 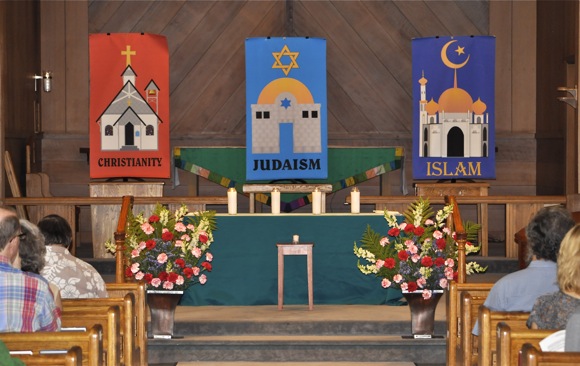 As Rabbi Patricia Karlin-Neumann observed late this afternoon, three faith traditions were today united under “one tent.” This particular “tent” may usually be used as a Christian place of worship , but under the auspices of Trinity Church in Menlo Park, it was a space where Christians, Jews and Muslims — and people of no faith tradition — came together for an interfaith service of remembrance and prayer for peace and healing on the 10th anniversary of 9/11.

The four pillar candles at the front of the space represented the four sites of the terrorists attacks on the United States ten years ago. Early in the service the small Yarzheit candle — associated with the Jewish tradition of mourning — was lit. Reflections were provided by Rabbi Karlin-Neumann as well as by the Rev. Matthew Dutton-Gillett, representing the Christian tradition, and Shahzad Chowdry, representing the Islamic tradition. Chodwry reminded participants that the Arab Spring demonstrated that Islamic nations, too,  yearn for democracy. Also participating was Rabbi Paul Shleffar and the Rev. Beth Foote. 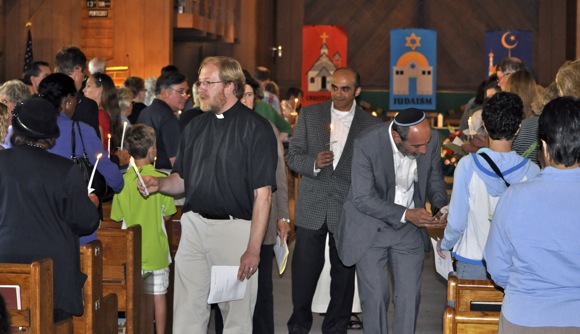 As the last of three chants was sung, the service leaders lit individual candles from the one of the four large pillars, which were then used to light the candles given to attendees, who, in procession, went outside and gathered around the Peace Pole. 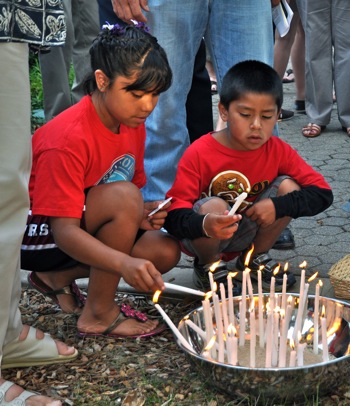 One by one each person placed a candle in the sand boxes under the Pole, in affirmation of the desire “for peace and reconciliation, our commitment to build a path toward peace and a world of love, awareness, trust, friendship and respect among all people.”