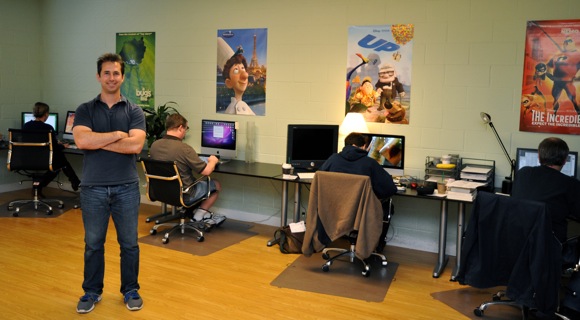 While on sabbatical from Electronic Arts, Zach Waibel looked to the future and saw two things — games would be digital and he’d be creating them himself. “Like a lot of startups, Tricky Software began in our house,” he said. “The space was so small that I had to walk through my son’s room to get to my ‘office.'”

Since its founding, Tricky has created over 15 games, both its own titles and those for other companies,  focusing on games for mobile and the iPad.  Emma and the Inventor is one of the newest Tricky titles; the company also just produced Color Studio HD for Griffin Technology and Crayola.

The company reached its first level of success when Steve Jobs introduced Tricky’s Spore Origins at MacWorld in 2008. “That was our breakthrough, our first big game,” said Zach.

Outgrown its home office space, Tricky Software now has three spacious offices in downtown Menlo Park, qualifying it as another “hiding in plain sight” company. “When we expanded from one office to our current three, we thought about moving to Palo Alto and even looked at a hip downtown space,” said Zach. “But we live in Menlo, and we like it here. It’s more mellow and our employees like it here.”

In the process of developing games, the company has developed its own tools. “During the six years we’ve been in business, we’ve developed technology that allows us to quickly create and then distribute our games on different platforms,” said Zach. “It’s a valuable asset.”

Looking once again to the future, Zach forecasts continued expansion. “We’re going to continue doing what we’re doing, what’s made us successful. Every decision has to be a smart one.”