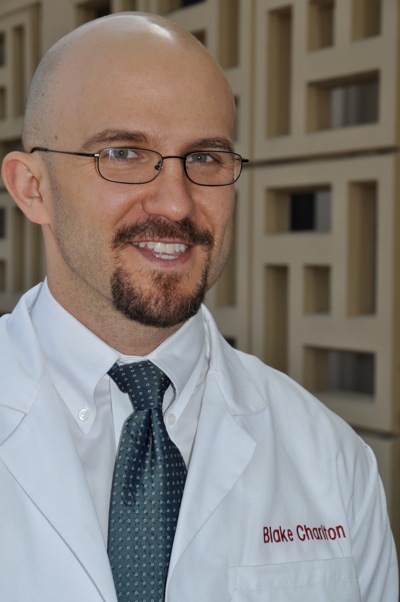 Tuesday was author/med student Blake Charlton’s “second book day” and as he wrote on his blog, “Bookdays are to authors are what birthdays are to everyone.” His cause for celebration was the release of Spellbound

, the second in his fantasy novel series. But if you missed marking the occasion, you can still attend his book launch appearance this Friday, Sept. 16 at 7:00 pm at Kepler’s followed by an after party — drinks and chat — at the BBC next door.

As was true when InMenlo first talked to him in March 2010, Blake is continuing to pursue two vocations, medicine and literature. “It’s true that my day job [going to med school] is often a day and night job,” he says. “The months that I’m scheduled at the hospital I hardly write at all. But when I’m working in a clinic, it’s more 9 to 5, and I can write in the evening.”

He’s now at work — sporadically — on the final book of the trilogy, which is titled Spellbreaker. He’ll soon need to decide what his medical specialty will be and has narrowed it down to three — internal medicine, pediatrics and neurology. “I’ve really enjoyed them all,” he says.

For the moment, he’s getting ready to go on a six-city book tour and feeling good about the favorable reviews that Spellbound is receiving. “Simultaneously epic and intimate, high-flying and grounded, funny and dark, suspenseful and emotional, Spellbound is a daring new work of fantasy that pushes the Spellwright Trilogy closer to its conclusion while remaining just as emotionally and intellectually challenging as the first installment, and just as compelling as a standalone work due to its expert character study,” said the Rob Will Review.

For the Menlo School grad, who like his protagonist Niocodemus overcame a learning disability, the normal is two careers, much like his mentor, Dr. Abraham Verghese, the Stanford Medical School professor and author of the best-selling novel, Cutting for Stone

. “He’s involved with the Stanford 25 Initiative, he’s an attending physician, he teaches, and he writes,” says Blake. “Having him as a mentor has been a godsend. I look at his career and hope to achieve just a fraction of what he’s accomplished at some point.”