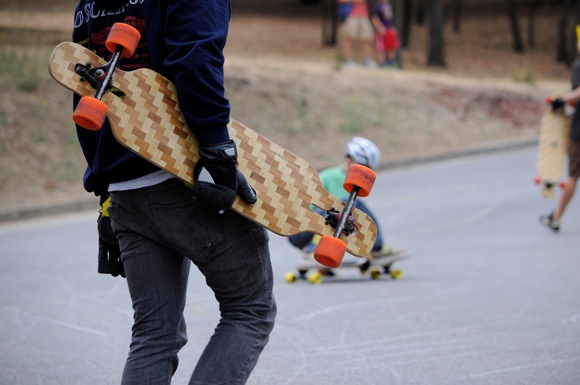 If you live near the top or bottom of Valparaiso along Sharon Hills Park, the whirring sound you’re hearing early this Saturday morning is skateboarders warming up for tomorrow’s big competition, Menlo Park Skate Jam. This is the second year in a row that Menlo Park resident David Hiltbrand has brought legitimate competition to his hometown. (David is pictured below at last year’s event.)

“It looks like we’re going to double the number of sponsors and spectators,” said David 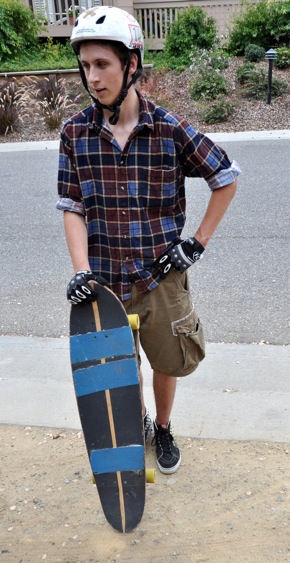 shortly before the weekend festivities kicked off last night at the Dutch Goose. “We’re expecting around 100 competitors. Out-of-towners are camping at a private residence in La Honda. It’s a cool community thing.”

Last year’s Skate Jam came as the result of a busted outlaw event and David bringing his fellow skate boarders to the Valparaiso hill where “he found everyone was respectful and let us do our thing.” That made him think, “Why not organize a legitimate competition.” The event last year was the first of its kind in Northern California.

This morning competitors got the first taste of the hill with practice runs through noon. Tomorrow’s schedule includes hard wheels at 11:00 am, showcasing technical sliding and spinning. There will also be a slow board race, an event that David characterizes as “the first of its kind in the world.” The point is to be the last one down the hill; stop or touch any part of your body to the ground and you face disqualification.

The open final starts around 2:00 pm, featuring some of the best long boarders and skate boarders. “You hear about all of these logistical nightmares about organizing an event but it’s totally doable,” said David. “I watch outlaws get busted all the time and there’s no reason for it. Just get the permits, some hay bales and make it happen”

Top photo of skateboarder carrying board by Chris Gulker