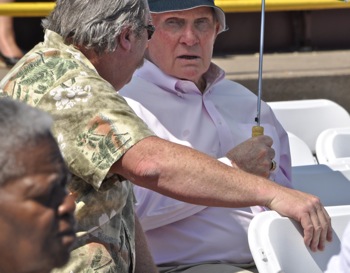 How many high school football coaches find not one but two retired pro football players in attendance at their memorial celebration? Such was the case in Atherton today when Ronnie Lott spoke and Y.A. Tittle (holding umbrella for shade) attended Coach Ben Park’s memorial celebration. Tittle lived up to one of Coach Park’s mantras, “never give up.” The quarterback played behind Frankie Alberts and John Brodie for much of his San Francisco 49er career, but found more success in his 30s leading the New York Giants to three straight Eastern Division titles. An NFL championship eluded Tittle but not the Pro Football Hall of Fame; he was inducted in 1971.