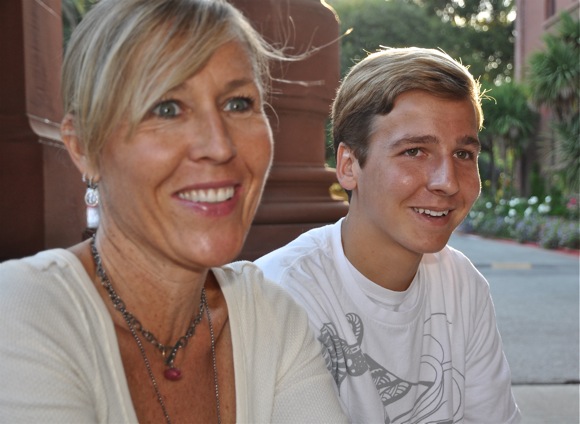 When Melissa Freeman struts down the runway with her son Christian at the 23rd annual Sacred Heart Fashion Show this Saturday, she’ll be one of four who’s both a parent and alum.

“I grew up in Atherton and went to St. Joseph’s and then Sacred Heart when it was still all girls,” she said during a recent on-campus visit. “We didn’t have anything like the fashion show. All my children are either at Sacred Heart or St. Joseph’s, but Christian is the oldest, so this is my first fashion show. I’ve been amazed at how involved the whole Sacred Heart community is, not just senior parents.”

Each of Sacred Heart’s 146 seniors team up with their parents for the show, modeling 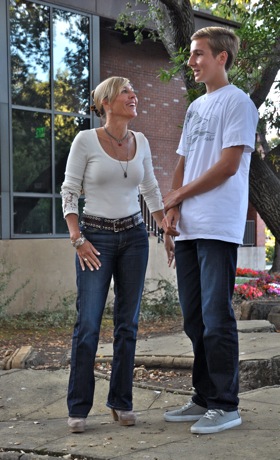 fashions from local stores and enjoying their “15 minutes of fame” on the runway. The show will feature a spectrum of styles, from casual clothes for teens to formal attire for adults. For Melissa and Christian participation has been easy — they live almost directly across the street in Menlo Park.

Like many of his classmates, this is the first time Christian has been in a fashion show, and he’s glad that he gets to wear a tuxedo, also a first for him. While he’s more comfortable running cross country or playing tennis, he understands that the fashion show is part of his “senior duty.” Once he graduates, he hopes to go to school in Southern California. “I want to stay in California and like the weather there,” he said.

Kim Selby is producing the Sacred Heart Fashion Show for the 13th year in a row. “It’s a really fun theme this year, Pop Heart, loosely based on Andy Warhol and Robert Indiana’s art,” she says. “I’m working with the most models ever, 296! The co-chairs, Lori Krikorian and Valerie Soltau are awesome. The songs aren’t based on the theme but there’s a lot of focus on fame and being famous.”

For Melissa, participating in the Fashion Show is a milestone of sorts. “It’s kind of bittersweet because it’s Christian’s senior year,” she said. “It’s going to be fun, but it also makes me realize he’s moving on and going off to college soon.”