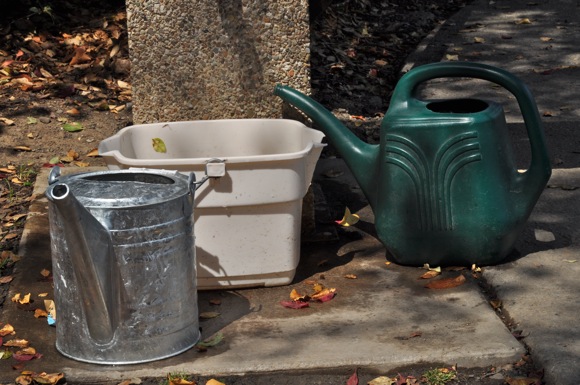 I could not help myself. I had a package of pumpkin (Cucurbita maxima) seeds, and I knew a great patch of well-drained soil where water was available. Even better, it was located in a small public park at a well-traveled intersection. Early one morning, I popped 20 seeds in the soil and watered. They all came up.

Being too busy to water them daily, I left a watering can next to the water fountain with a little sign asking passersby to pick up the can and help the pumpkins along. Almost three months have gone by, and the 20 young pumpkin plants are burnishing in the sun. At any given time of day when I drive by, there is a biker, a child, an old man hobbling over to the pumpkin patch to drizzle these little golden orbs with cold, clear water.

On a few occasions, I have run down with a pail of organic fertilizer to help the young 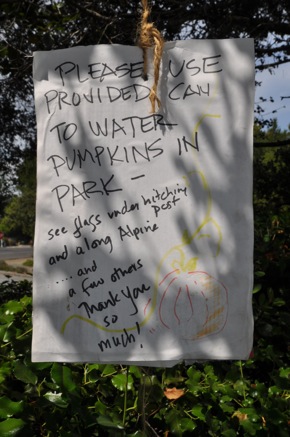 plants along, but mostly I have watched what was happening at the busy little corner. I began to see this more as a social experiment, asking myself, “Why would anyone pick up the can and water these tiny vegetables? What would someone be thinking and feeling?” It seemed a very eloquent form of expression.

I have walked through the park with my dogs and encountered some of these folks. I smile and walk on, not wanting to interfere with their process, their engagement. One day I walked through and a man eating his lunch at a nearby table was saying, “This is just beautiful.”

Why would anyone bother to fill up the can and step into the unfurling vines spreading across the hot earth? Maybe they don’t have a garden to tend at home, maybe they see the opportunity of something growing on neglected land. Curious, I wondered what would happen if I left the cans filled with water versus empty. Would people be more apt to stop and water with the cans filled? No, it seemed as if those who chose to stop seemed determined to get the job done on their own. 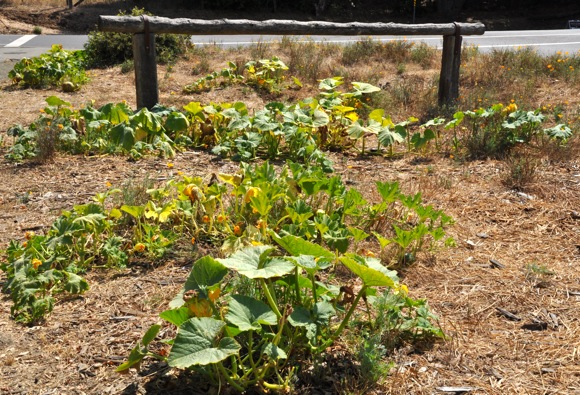 I did a little research on guerrilla gardening, an organic movement which is defined as “planting a seed or plant in an abandoned place, cultivating someone else’s land or public land which is not being used.” After all, only 15% of the world’s population owns land. The new movement of guerrilla gardening is about claiming this unused space and cultivating it as a cohesive gesture to form community around this concept.

As I got more excited about this idea of planting in untended ground, I stuck tomatoes and squash and state fair zinnias in the front beds of a local merchant. Well-tended land appears more prosperous. As I pass by, I see people talking to this merchant about his new boisterously colorful garden.

Whatever the reason, people have been stopping to help the pumpkins along feels to me like potential for change. This simple act of caring for a seed and tiny plant, taking the responsibility for picking up the can, makes me feel hopeful.