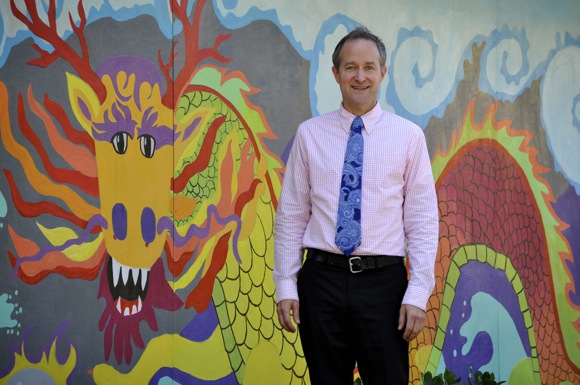 One theme kept emerging when InMenlo sat down to talk with Scott Erickson, the new Head of School at Phillips Brooks: community.

“My priority here is to build community among faculty, staff,  and parents and also being a wonderful neighbor,” he said.

Scott, an ordained Episcopal priest, comes to the private pre-K through fifth grade school from the National Cathedral School in Washington, D.C. where he was Director of the Middle School and Director of Studies.

“The D.C. area had a really hot and humid summer,” he said. “Then just after I left there was the earthquake that damaged the Cathedral but not the school itself, followed by the remnants of Hurricane Irene. That enormous disruption of my old space is a bit unsettling.

“But the transition here has been very smooth. Everything that has to do with Phillips Brooks is of such high quality — the teachers, students, trustees, administration team. My job is to focus on our established core values and offer the best learning environment for the kids.”

Scott is making his home in Cole Valley with his partner Ryan Banks and their two dogs and a cat. “The commute to Menlo Park gives me time to think,” he said. “And I value having a space that’s distinct when the work day is over. My home is that. We’re just starting to discover all the City has to offer, starting with some great walks in Golden Gate Park.”

Long a resident of the East Coast, Scott grew up in Iowa. He was a music major as an undergraduate. Being an ordained minister gives him added skills beyond the administrative, what he describes as a “nurturing pastoral presence.”

As for his  first-year commitments beyond community building: “I’ll feel good if people get to know me and I get to know them. And I want to build on the great things that are happening at Phillips Brook, becoming a catalyst for purposeful growth that’s meaningful and intentional.”