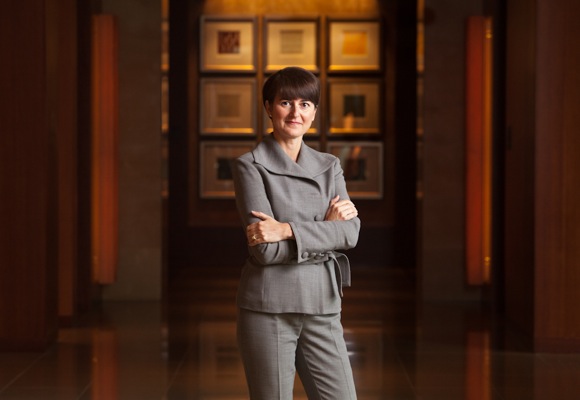 That she’d end up in the hospitality industry was not what Nicole Neal had in mind when she majored in industrial and manufacturing engineering at Cal Poly San Luis Obispo. But her husband landed a job in the Napa Valley soon after college and, as she says, there were really two employment options — hotels or wineries.

Since that time, she’s worked her way geographically from north to south, taking a succession of concierge manager jobs at noted establishments like Meadowood in St. Helena, the Prescott Hotel in San Francisco, and the Ritz Carlton in Half Moon Bay.

Now the Willows neighborhood resident — who says she has the nicest neighbors in the world — can almost walk to work. She’s the Director of PR/Communications at the Four Seasons Silicon Valley, where she’s worked for the past six years in a variety of capacities, since February in that position.

“All my jobs have been about building relationships,” she says. “Here I get to work for a great general manager, Tracy Mercer, who’s both a mentor and an inspiration. Plus, he gives me creative freedom.”

Nicole’s creative thinking will be showcased at an upcoming winemakers’ dinner on Oct. 15 with a decidedly female bent. “We do winemaker dinners regularly at Quattro [the hotel’s restaurant], but it occurred to me it would be fun to focus on female winemakers and do it as a benefit for the Stanford’s Women’s Health program, which is celebrating its 10th anniversary this month.”

The menu created by Executive Chef Marco Fossati, Nicole explains, is inspired by local female farmers, paired with wines including Eileen Crane’s Domaine Carneros 2007 Brut, Molly Hill’s Sequoia Grove Chardonnay, Peggy Ryan’s Ryan Wine Center Pinot Noir, and Cathy Corison’s Cabernet Sauvignon. To round out the all-things-female theme, there will be informal modeling featuring clothes by Palo Alto designer Camilla Olson. The cost is $150 – a portion of the proceeds will be donated to Women’s Health — and reservations are recommended (650) 470-2889.

While Nicole’s duties now focus on media relations and publicity, for the curious who wonder just what a concierge can and cannot do, she shared some tales from her concierge manager days. The winner  of the “most decadent” request category — a Napa Valley guest who wanted to do something special for his wife’s birthday, so asked Nicole to charter a yacht to go sailing on the Bay with Fleur du Lys chef Hubert Keller on board to prepare lunch; a helicopter transported them to and from wine country.

And as for the “craziest,” she says it was the morning she received these requests all between 7:00 and 7:30 am: rent a Hummer, procure a black wig for a first-of-the-morning skit, find some Army fatigues, and send up the words to Winston Churchill’s speech, the Finest Hour!