Sneak preview of Revenge of Electric Car at Kepler’s on Oct. 15 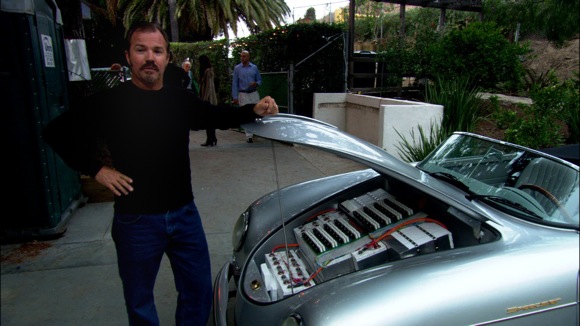 Four years after being written off as dead by the major automobile companies, the electric car is back with a vengeance. A sneak preview showing of a documentary on the subject, Revenge of the Electric Car, will be screened at Kepler’s on Saturday, Oct 15 at 7:30 pm (refreshments at 7:00 pm). A Q&A with Jay Friedland, Legislative Director, Plug In America, and Dorian West, Director of Engineering Power Train, Tesla Motors, will follow the screening.

In the film, director Chris Paine looks behind the closed doors of Nissan, GM, the Silicon Valley start-up Tesla Motors, and an independent car converter named Greg “Gadget” Abbott (pictured) to reveal the story of the global resurgence of electric cars. With almost every major car maker now jumping to produce new electric models, Revenge of the Electric Car follows the race to be the first, the best, and to win the hearts and minds of the public around the world.

Advance tickets, available online, are $12. If available, tickets at the door the evening of the screening will be $16.