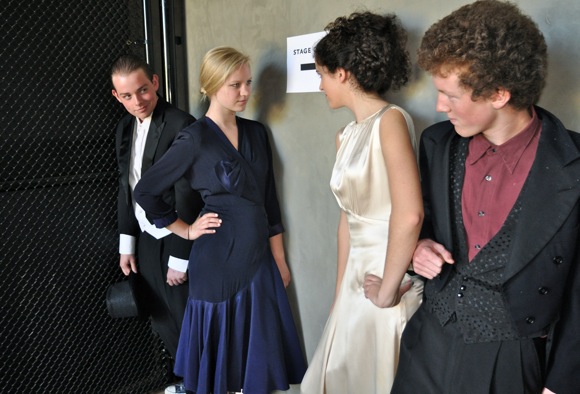 Yearning for fame. Fighting for their name in lights. Struggling to survive. It’s all part of life during the Depression at the Footlights Club, setting for the play Stage Door by Edna Ferber and George Kaufman, which will be performed beginning Thursday, Nov. 3 at the Menlo-Atherton Performing Art Center.

Why mount a production that first played Broadway during the 1930s? “The play is well written, and every role has some quirky character that’s easily accessible for today’s teenagers,” says M-A drama teacher and the play’s director, D.J. Zwicker-Sobrepena. 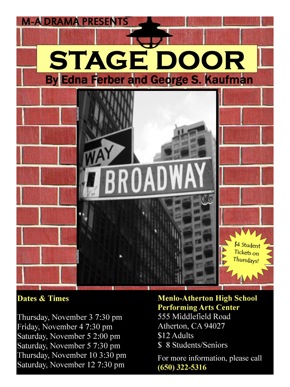 We stopped by to chat with the play’s four lead actors, who head a cast that includes 30 performers. Will Hanley (far left, top photo), a sophomore who plays the charming cad, Keith Burgess, says it’s refreshing to play a jerk. “This is a twist,” he says. “I’ve played a jerk who turns into a nice guy but this time I’m a nice guy who turns into a jerk.”

Senior Claire Jungleib (second from right, top photo) plays Terry Randall: “Acting with Will is great. Our scenes together are fun. But from Terry’s perspective, it’s painful. She wants to appear on Broadway, and he’s going to give her a part but he doesn’t show her any respect.”

Gavin Rea (far right, top photo) plays nice guy David Kingsley. “He’s older and sophisticated but a bit timid,” say the senior who is appearing in his first M-A production. “Senior year gives you the freedom to do extra stuff .”

Junior Hanna Berggren (second from left, top photo) says portraying Jean Maitland has helped bring out her confidence as an actor. “I’d also like to be famous on stage or screen,” she says. “I’m definitely more of a musician than an actress but this cast makes me feel like part of an acting family.” 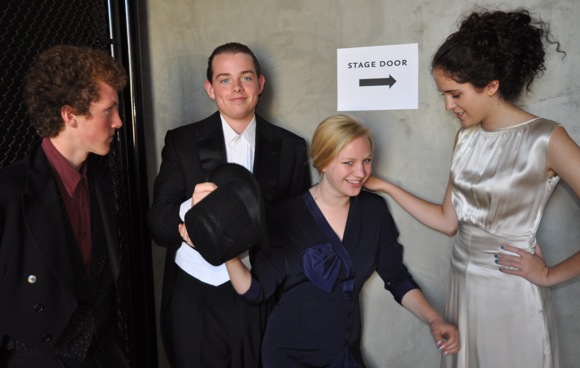 DJ points out that the play is “a great mix of comedy and drama. The audience can really feel for the characters and also laugh at their quirks.”

There are a total of 60 students involved in the production, which features a boxed set for the first time at MAPAC, which the students built.

Claire, who is also president of the Drama Club, is enjoying her both her administrative and starring role: “I’ve known a lot of the people involved for four years now. But in this show they’re displaying completely new characters. It’s great to see people expanding.”

Update courtesy of M-A Drama Booster Lyn Napel as of 10/27: “Teacher-director DJ, or Ms. Z as the kids call her, had her baby yesterday morning, a boy named Zachary. All are fine, but he came a whole week earlier than expected. The actors and production team are facing the final push of long Tech Week rehearsals followed by Opening Night on the 3rd, with the student production team – Student Director Maddie Napel and Co- Stage Managers Maddie Rostami and Matt Schertler – managing the project. There is so much fine-tuning that happens at this stage of rehearsals. The responsibility and the challenge is truly unprecedented, and the kids are stressed but rising to the occasion!”

Actually, the show on the tenth is at 3:30. It’s for students who want to come and see it straight after school, and as a second, late, matinee.