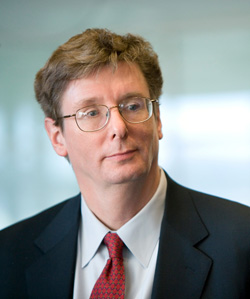 SRI International, host of Café Scientifique Silicon Valley, commemorates its 65th anniversary on Sunday, November 6, 2011. On November 8 at the usual Café Scientifique time — the second Tuesday of the month at 6 pm — the President and CEO of SRI, Curt Carlson will discuss the global innovation economy and its implications for science, technology, education, and government policy.

SRI International, a nonprofit research and development organization, performs sponsored R&D for governments, businesses, and foundations. It brings its innovations to the marketplace through technology licensing, new products, and spin-off ventures (such as Nuance Communications and Intuitive Surgical). The organization is known for world-changing advances in computing (ranging from the computer mouse in the 1960s to the Siri technology in the new Apple iPhone), health and pharmaceuticals, chemistry and materials, sensing, energy, education, national defense, and more.

Carlson has been President and CEO of SRI since 1998. He is widely sought as a thought leader, advising government officials in the U.S. and abroad on innovation and competitiveness. He is a member of President Obama’s National Advisory Council on Innovation and Entrepreneurship, and he co-chairs the Scientific Advisory Board of the Singapore National Research Foundation.

BusinessWeek selected his book, Innovation: The Five Disciplines for Creating What Customers Want, as one of the top 10 business books in 2006. Carlson has received two Emmy Awards and the Otto Schade Prize from the Society for Information Display. He has a Ph.D. from Rutgers University.

Café Scientifique events are open to all free of charge. No reservations are necessary. Doors open at 5:15 pm; program begins at 6:00 p. Coffee, tea and biscotti will be complimentary, provided by SRI. Bring your own mug if you wish to avoid using disposable cups. Courtesy of Kepler’s there will be a drawing for a $30 gift card for books or merchandise at Kepler’s on El Camino Real in Menlo Park.