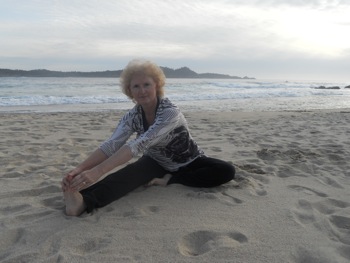 If you think of yoga as ultra-limber people sitting around in pretzel shapes, or high-energy types sweating it out in overheated rooms, you might be surprised to learn that there is an alternative. Yin Yoga, known as a “quiet practice,” focuses on longer-held poses (mostly seated) that are designed to slowly and safely stretch the connective tissue in the body.

Yin was first practiced in Japan, then brought to the United States by Paul Grilley and Sarah Powers, both well-known yoga teachers who were looking for a deeper, more meditative way to practice yoga. According to Grilley, Yin is not a new form of yoga, but rather a return to what yoga originally set out to be, a means to allow practitioners to sit for long periods in meditation. Yin is also believed to stimulate the energy meridians that pass through the body, encouraging good health.

Yin is now taught in yoga studios and health retreats around the country, and is regarded as an important counterbalance to the fast pace of power yoga. “You can be aerobically fit, but if your knees, hips and back are inflexible, you will have problems down the road, ” says Menlo Park yoga teacher Sheryl Nonnenberg who will be offering a Yin/Vinyasa workshop on Saturday, Nov. 19 from 3:00 to 5:00 pm at Menlo Pilates & Yoga at 1011 El Camino in Menlo Park. The workshop fee is $35 and open to all interested participants.