No crab for Thanksgiving? Go get it yourself! 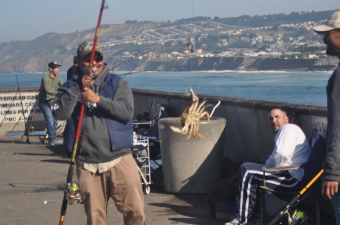 There are whoops of joy and triumph on the Pacifica Pier. The Dungeness crab sport season [different from the commercial season] opened Nov. 5 and pier anglers have been celebrating with catches of fat crab since.

A lot of females, which should be released, are being caught but there are plenty of six-and seven-inch males hitting the buckets and by all accounts they are fat and full of sweet meat. Party boats going out of every harbor from Eureka to Monterey are coming back with limits every trip. This is only the beginning of what is shaping up to be as much of a banner season as the one enjoyed last year.

It’s not hard to get started. The price of entry is low and if you do your crabbing from a pier like Pacifica, no license is required. There are two excellent bait shops and sources of information in Pacifica: The Rusty Hook (650) 355-8303 and New Coastside Bait (650) 355-9790. At both shops you could walk in empty handed and leave fully-equipped for a day at the pier for about $70 – bait included.

The most popular method to crab is to use a 10-foot rod and a reel loaded with 25- to 40-pound test with a snare at the end. The snare is stuffed with bait – preferably squid, mackerel or sardines – and cast out from the pier. The crabs are entangled in the loops of line attached from the snare when they try to get the bait.

A rod and reel combo  can be purchased for between $63 and $55 from either store. Snares are $7 each and it’s advised to carry at least a few to account for crushed bait cages, snapped lines, etc. You also will need a measuring gauge to make sure the crabs are legal. Crabs must be 5-3/4 inches to be kept. If caught by boat the crabs must be six inches.

Both Sheryl Jimno at the Rusty Hook and Marque Glisson at New Coastside said it is strongly recommended to stick to squid, sardines or mackerel as bait and to avoid chicken or salmon heads.
“Avoid chicken or salmon. They bring in the sea lions,” Glisson advised. “Crabs will eat anything. They’re scavengers. They’ll eat peanut butter and jelly. But if they come around the pier that’s it for the crabbing.”

Before going to Pacifica when the weather is bad, call Rusty Hook or New Coastside to make sure the pier is open. The pier closes during periods of high surf. The limit is six crabs in Sonoma, Marin, San Francisco, San Mateo, Santa Cruz and Monterey. The limit is 10 everywhere else. Be reminded Dungeness crab caught from the piers inside the Golden Gate may not be kept.

The New Captain Pete out of Pillar Point is planning on running two trips Nov. 23, the day before Thanksgiving. Trips leave at 8:30 am and 1:30 pm Cost is $50.