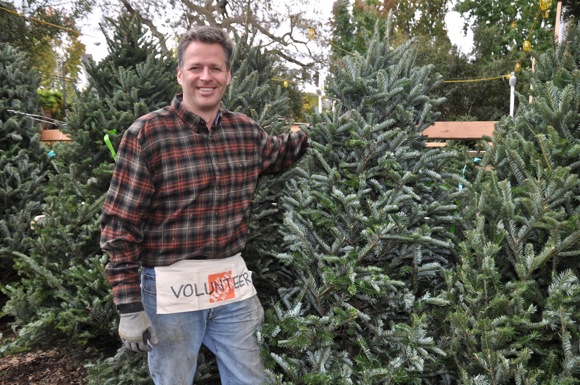 Volunteering at the Nativity School Christmas tree lot has come full circle for Adam Kerr, who is also chairing the fundraising event this year. He was part of the group of parents who started the sale in 1998, when his son was a first grader. This year, it’s a daughter who’s the first grader.

“I think of it as my second decade in tree sales,” he said Wednesday afternoon, as final preparations for the lot’s opening the day after Thanksgiving. 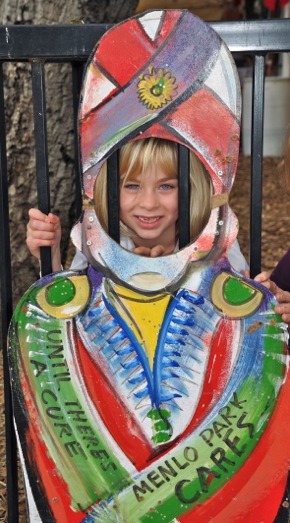 There are four types of fir trees for sale — Douglas, Grand, Fraser and Noble — from the same Oregon grower who supplied trees the very first year. The lot is open weekends through Dec. 17 as well as Tuesday through Thursday from 4:00 to 8:00 pm, and Fridays from 4:00 to 9:00 pm.

Adam and almost 200 other parents from the school have logged about 3,000 volunteers hours to plan and staff this year’s tree lot, which is the school’s second largest fundraiser after the Nativity Carnival. Beyond fundraising, their goal is to make it a fun family event, marked by service with a personal touch.

As chair, Adam is struck with  people’s response to helping make the lot successful. “It’s more than our parents, it’s the local business community, too,” he said. “Plus I called a guy in Ohio about some enclosures for keeping computers and printers free from dust and dirt, and he sent one out free of charge.”

While this year’s lot features a new lighting and stereo system, and volunteers use the latest in techie devices — checkout is done on iPads — there are still many old-fashioned touches. As example, each tree purchaser receives a hand-colored thank you note from the school’s student body. And then there’s one of the highlights of a season — a visit by Santa on Dec. 3 and 10.

Nativity School is located at the corner of Oak Grove and Laurel in Menlo Park.