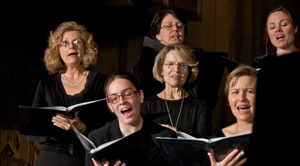 The first — a free sampler concert — takes place on Saturday, Dec. 3 at 11:00 am at the Menlo Park City Council Chambers at 701 Laurel St.

The second — a full concert performance titled Let It Snow! — is at St. Bede’s Episcopal Church on Friday, Dec. 9 at 7:30 pm. The program features classical and popular pieces, with composers ranging from Prokofiev to Frank Loesser.

Tickets are $15/$12 and available at the door. Children under 12 are free. There will be refreshments after the performance.

Now in its 13th year, the Menlo Park Chorus combines musical training and discipline with a relaxed, neighborly atmosphere.  The ensemble performs a variety of music and performs several times a year.

April McNeely is the director of the City-sponsored musical group, with John Iosefa as rehearsal and concert accompanist. “I began planning this holiday concert in August — and managed to keep the Christmas spirit going for five months of rehearsals,” she said.  “We have a ‘secret approach,’ which the audience will find highly enjoyable.”