Esther Baran: Artist returns to her roots with opening of gallery at Allied Arts 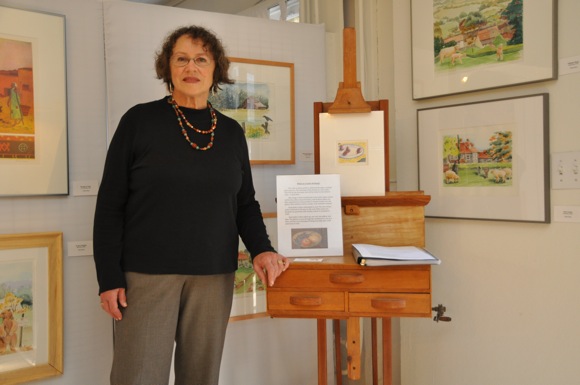 “Of all the places to have a gallery, this is just perfect,” says artist Esther Baran, sitting in the well-lit space tucked in a back corner near the Old Wood Barn of the Allied Arts Guild.

It’s also a return to her local roots. Esther grew up in Menlo Park, attending Encinal, and graduating from Menlo-Atherton High School. She shares the space with her daughter Nicole, who runs a non-profit focused on the prevention of domestic abuse.

Esther has long been interested in folk tales from around the world and has used them as inspiration for her work. Her first medium was color etchings, and she supported herself for years doing illustrations for educational publishers. Twenty years ago she turned to watercolors.

“In both media, I do still lifes of fruits and vegetables, especially vegetables,” she writes in her artist’s statement. “There is something very evocative in the shape and texture of a tomato or eggplant.”

Another long-time favorite subject has been foxes, and there are numerous examples shown in the gallery, many with a touch of whimsy. “I’m particularly interested in animals that have been forced out of their environment by human encroachment,” she says. “Foxes are so adaptable. Their ability to survive is quite impressive.”

Esther shares space with the Center for Relationship Abuse Awareness, a nonprofit whose mission to to educate and train communities and institutions to respond effectively to women who are experiencing relationship abuse. Proceeds from her artwork benefit this organization.

In addition to originals, Esther has printed note cards, many currently with a holiday theme, as well as larger prints, some or which are propped up on an easel that fills the corner of her studio. “It was owned by my uncle Ralph Sims, who was a painter, and one of the original artists at the Allied Arts,” she says. “It is just one more connection that makes being here seem so right.”