Cj Becker: Reflections on Walden from a Menlo Park perspective 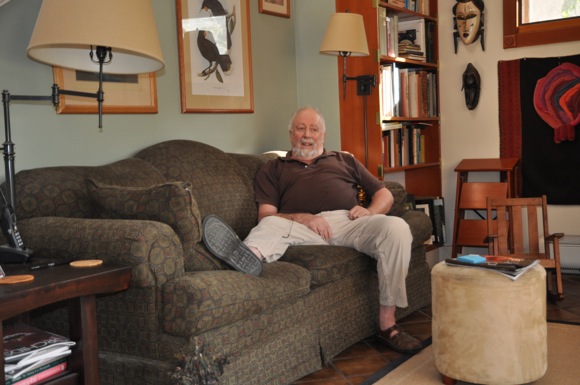 Cj Becker came to Menlo Park 30 years ago when his psychologist wife got a job at the VA. The oil crisis taught them the dangers of relying on the automobile, so they settled close to work in the Willows in a cottage (since expanded) that had been trucked in by a Army Quarter Master Sergeant in 1924.

“That’s why there are steps up, to allow for the foundation,” he says. “The house was Army green. I found a 1903 grocery bill in the cupboard from Cooley Landing Grocery.”

Cj assumed the duties of “general handyman, president of the mothers’ club, and chief cook and bottle washer.” He also started writing notes in a diary, some observations, some written records of his dreams. Then 10 years ago, he committed himself to writing full time, starting with a book on automobile repair.

“I have a long list of things to write,” he says. “It keeps me sane. I don’t particularly want to go out and sell books, just keep my mind going.”

His latest book is called The Walden Project; or, Life in the Suburbs of Silicon Valley. “In many ways it continues the discussion between Thoreau and Skinner about the value of self-reliance and the need for community,” he writes in the book’s prologue. “It combines direct observation with the literary tradition in natural history backed by a fully stocked library and the recursive, fact-checking capacity provided by the web.”

After a writing a half dozen or so books, Cj is now shifting to a creating for the iPad where he’s uploaded photos of the great art of Western civilization. “It’s like a book, but it’s more intimate as it sits in your lap,” he says. “I’ve dedicated it to the memory of Steve Jobs: ‘He provided us with the medium; it is up to us to use it for a message worth paying attention to.'”