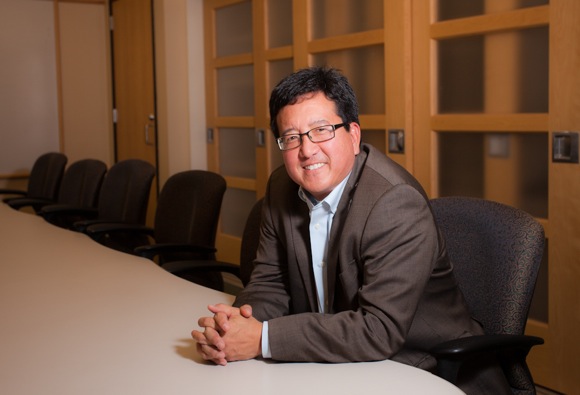 Along with Kirsten Keith, who was elected Mayor by her peers at a December 6 Menlo Park City Council meeting, Peter Ohtaki is is starting his second year on the Council. Peter grew up in Menlo Park before heading back east to attend college at Harvard. He returned west to pursue an MBA at Stanford and has lived locally ever since. We talked to him about his first year in office and his transition from the business to nonprofit sector.

InMenlo: How did you wind up heading the nonprofit California Resiliency Alliance? And what does it do?

Peter: [After graduating from Stanford] I did the start-up thing and it didn’t quite pan out. What I liked best was forging strategic relationships.

The California Resiliency Alliance is a nonprofit that’s a public/private partnership that brings businesses in the area and around the state to work with government to jointly prepare for a disaster, whether it’s a natural or manmade. One goal is increase preparedness regionally.

When I took the position, I thought I’d do it for a year and then do another startup. But it’s been six years and I really enjoy bringing business and government together to solve problems. Each disaster that happens somewhere else in the world, teaches us a lesson, and spotlights a gap that needs to be addressed.

InMenlo: What prompted you to run for a seat on the City Council?

Peter: One reason is that I live on Middle Ave. and for the last several years I’ve looked at the empty car dealers on El Camino. So I became interested in the downtown specific plan and felt that the priority needed to be around El Camino. After working on it, I feel pretty good about how it’s turned out.

InMenlo: People talk about the number of businesses closing on Santa Cruz Ave. downtown and what seems like a lot of unoccupied storefronts. What’s perception and what’s reality?

Peter: City staff have done an analysis on downtown, and, as whole, the percentage of unoccupied storefronts is 7 or 8%, which is not higher than other cities. I’m concerned that those vacancies are concentrated, for example in the 800 block.  And that heightens the perception of vacancy.

As we’re finishing the specific plan, we’re going to need to shift gears and put some efforts into marketing to attract smaller businesses to downtown.

The perception is that rents are high and that landlords are holding out for longer-term leases. I believe we need to engage the landlords and encourage shorter-term leases. After all, Santa Cruz Avenue in Menlo Park is a pretty good location.

InMenlo: Any surprises or changes in viewpoints now that you’re an insider?

Peter: I’d say the biggest surprise is that [serving on the City Council has] been more fun than I expected. And I really mean that. Part of that is that I feel like we’ve been able to get things done, and  you can see that impact. I think this City Council works together pretty well and has a good relationship with staff.

InMenlo: What do you do to let off steam?

Peter: I run and I play golf. But chasing three kids [ages 2, 4, and 6] around on the weekend is plenty of exercise.