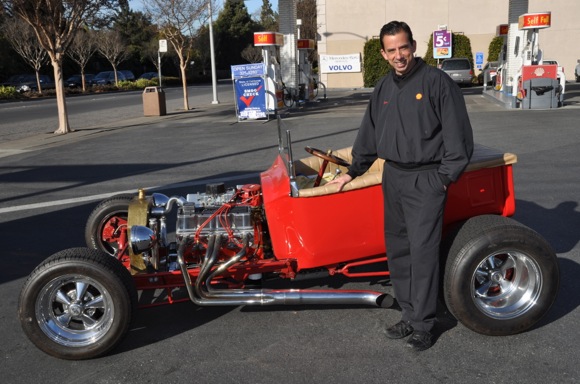 It’s hard to drive by Menlo-Atherton Shell at the corner of El Camino and Valparaiso without noticing the shiny-red hot rod parked out front. The car is a 1923 T-bucket, and it’s just gotten a new engine, explains station owner Dan Bajada.

Dan, a second generation owner of the Shell station, oversees a staff of 16 and  a brisk auto repair/maintenance business. “My Dad opened up in 1968 and I never thought seriously about doing anything else,” he says. “I love our customers and I love automobiles. My son is a senior in high school and he’s interested in being the third generation.” 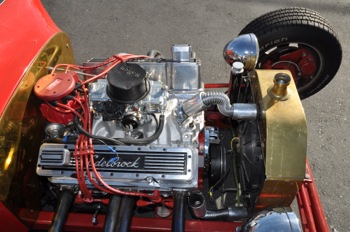 About the hot rod’s new engine, Dan explains it’s all chrome with electronics updated to the late 1980s. “It’s been blueprinted, balanced and dynoed,” he adds.

The T-bucket is a car that’s “just for fun,” says Dan. “There’s no suspension so the ride is really rough. It’s for driving around town, not on the freeway.”

While the owner is intent on selling the hot rod — it’s priced at $16,500 — Dan says it will be hard to see it go. “It’s attracted a lot of attention and sparked a lot of conversation.”