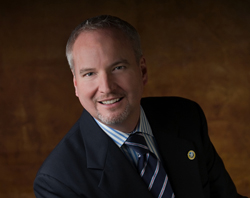 Menlo Park Mayor Kirsten Keith announced today that Alex McIntyre will be the next City Manager of Menlo Park, effective March 5, 2012. McIntyre is currently City Manager for the City of Lake Oswego, Oregon, where he has worked since 2008. He replaces Glen Rojas who retired in December after four and one half years as City Manager.

The new City Manager was selected from a pool of over 50 candidates based on a selection process that included characteristics suggested in a community survey, an interview panel of community representatives and extensive interviews with City Council members.

McIntyre was Chief Assistant County Administrator with the County of Marin from 2006-2008, and before that was Town Manager of Tiburon from 2000-2006. He also served locally as Town Manager of Portola Valley from 1997-2000. He holds a Bachelor’s Degree in Political Science from the University of California, Irvine, and a Masters of Public Administration from the University of Southern California.

McIntyre’s annual salary will be $199,000 per year. The City will also make a contribution to a 401-A deferred compensation plan for him in the amount of $9,500 annually. In addition, he will receive a monthly car allowance of $320.00 and receive retirement, health, and term life insurance consistent with the City’s management benefit plan. The City has agreed to make a loan to McIntyre of up to $1,350,000 with interest at 3.5% to assist him in the purchase of a home in the City of Menlo Park.

Not a great example of high proficiency in this selection– just a dawdling, timid, feather – in – the cap kind of Manager. He had little to do with LOIS’s benefits, construction timetable and performance incentives.

He really never took a strong hold in Lake Oswego, and then obviously in 2011 was casting about for his next position — and voila — he now returns to NoCal —

You’ll see–he’s nothing really remarkable at all and we will barely notice his absence!